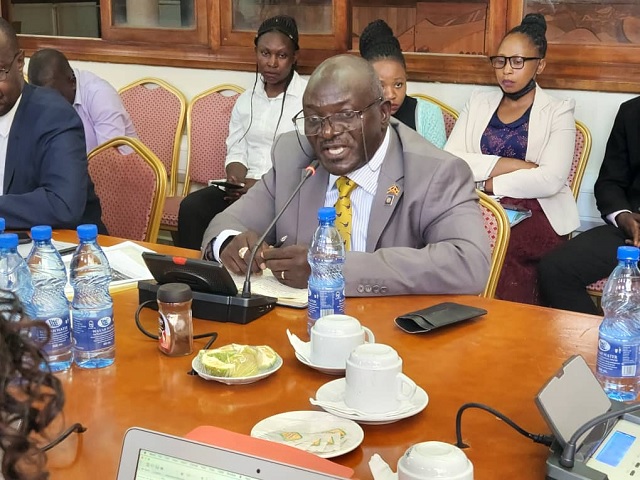 The Minister of Works and Transport, Gen Katumba Wamala has told Members of Parliament on the Committee of Commissions, Statutory Authorities and State Enterprises (COSASE) that Jenifer Bamuturaki was appointed to the position of Chief Executive Officer of Uganda Airlines following a presidential directive.

Following an audit report, the Committee in its investigations found that Bamuturaki did not meet the minimum qualifications for the position of CEO of the airline and was not subject to the necessary recruitment process before being appointed to her position.

The Chairperson of the committee, Joel Ssenyonyi questioned the minister over his role in the recruitment of Bamuturaki given that he is the overseer and supervisor of the board of directors and key shareholder of the airline.

Ssenyonyi added that PriceWaterHouse Coopers had been hired to conduct the recruitment but Bamuturaki was appointed before the process as completed.

“If indeed she was competent enough, why was she not subjected to the due process which is both legal and fair like the rest?” he asked.

Katumba Wamala said that he had no authority to question the presidential directive besides recommending it to the Board of Directors of the airline.

“The President wrote in his handwriting a letter stating that he had done due diligence and listed a number of reasons supporting his directive to the airline to appoint Bamuturaki,” he said.

The Minister added that it would have been disrespectful for him to question or go against the directive of the President.

However, Ssenyonyi said that there are legally binding procedures in place to facilitate the recruitment of a person to the position of CEO which were flouted.

Mawokota County South MP, Yusuf Nsibambi added that the airline is a limited liability company and not a parastatal which the government merely has shares in among other shareholders.

He said that the airline has no article within its articles of association giving powers to the President or the minister to legally appoint a CEO.

“It will be hard for you to attract the confidence of the public you intend to sell shares of the airline to while making illegal decisions that affect the management of the airline like this one,” he added.

Nsibambi advised the minister to always refer future management and governance issues to the established laws because all appointments made are all bound by certain laws that must be followed.

“When you subject public institutions which are quasi-private with provisions for the public to invest to presidential directives, you are going to find it hard to keep any private investors because they would want to have a stake in making those management and governance decisions,” he said.

Nsibambi told Katumba Wamala that it is not disrespectful to advise the President due processes over a directive he has given.

“For the sake of exonerating and shielding both of you if, for unforeseen reasons, the directive yields damning repercussions in the future,” Nsibambi said.