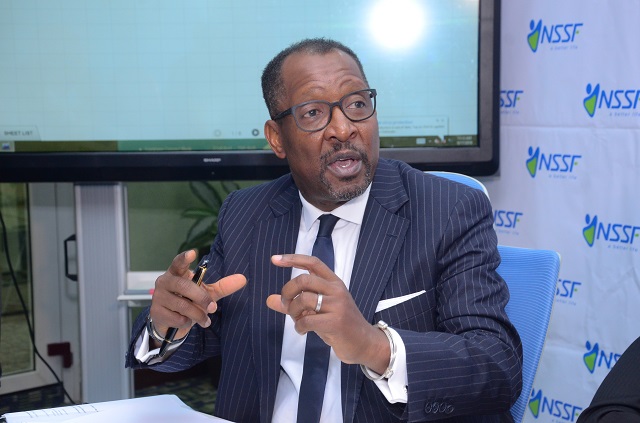 A team of four Ugandans who include Lubowa Muhammad Kityo, Bogere Moses, Namanya Betty, Daphine Nakanwagi the lawful owners of land measuring over 186 acres located in Lubowa on block 269, plots 3234, 3235,3236,3237,3238,3239, and 3240 respectively have pledged to protect their ownership against whoever wants to grab their land.

The four owners have been battling in court with the National Social Security Fund – NSSF over the ownership of the land until Court made a ruling in their favor and even ordered for compensation.

According to the documents tendered in court, the land owners dragged commissioner land Registration in court vide Misc cause No 227 of 2020 accusing him of illegally canceling of their title.

The case was before justice Sekana Musa who ruled that commissioner land Registration had no right to cancel the certificate of titles on the basis of forgery.

“In the premises I find that the respondent had no right to cancel the applicant’s certificate of tittles on the basis of forgery and I hereby grant this application with costs to the applicants,” justice Sekana Musa’s ruling reads.

Justice Sekana says that Court quashes the decision of the registrar land Registration cancelling the certificates of tittle for the applicants.

According documents from the Internal office memorandum “MEMO” from ministry of lands housing and Urban development dated 10/05/2021, Under the Ref RE Land located in Lubowa of wakiso District Doubly Registered as Block 269 plots 3234- 3240 and also as Block 269 plot 1322, claimed by both National social security fund (NSSF) and some individuals seen and obtained indicate that Hon Betty Namisango Kamya while still the Minister of lands, housing and Urban development directed the acting commissioner for land Registration to comply with the Court order and the ruling under Misc cause No 227 of 2020 dated 21st Dec 2020 by facilitating the quite possession and free enjoyment of ownership of plots 3234- 3240 by Lubowa Muhammad Kityo, Bogere Moses, Namanya Betty and Daphine Nakanwagi by allowing them to transact any lawful business of their choice on the subject land governed by the principal of justice delayed is justice denied.

Hon Kamya added that she will be informing Col Edith Nakalema of these findings and her directive to comply with the Court order.

However, owners of the Land say they have been reliably informed that the NSSF intends to launch the commissioning their housing project and they intend to invite President Museveni as the Chief Guest on their land without them as part of the development.

“We have gotten intelligence information that NSSF is launching the commissioning of their housing project which were built on our land which they have not yet cleared with and they have called the President of this country to be the chief Guest which is contrary to the court ruling and judgement that gave us powers on our Land,” the owners said.