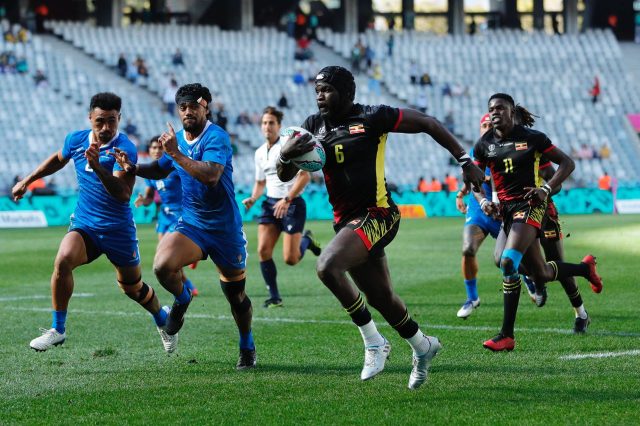 Uganda failed to get past the first hurdle after defeat against Samoa as the 2022 Rugby World Cup Sevens got underway in South Africa.

The Uganda Sevens fell to Samoa 33-07 on Friday at the Cape Town Stadium.

Captain Michael Wokorach handed Uganda a dream start when he crossed over right down in the middle after collecting from Aaron Ofoyrwoth for the first Try in the third minute.

And Phillip Wokorach split the uprights with a close-range conversion.

But Uganda failed to build from that early start, with Steve Onosai and Uaina Sione scoring converted Tries for Samoa to lead 14-07 at halftime.

From restart, Onosai and Melani Matavao added two for Samoa and it couldn’t get worse for Uganda from thereafter when Ian Munyani was sin-binned.

It’s strong to note that Uganda also lost to Samoa, 45-07, at this very stage when they made their debut in San Francisco at the 2018 Rugby World Cup Sevens.

Then, Uganda went on to finish 19th.

Coach Tolbert Onyango and his charges will hope to get a better Placement this time round despite his side missing out on a place in the Round of 16 where Samoa will face USA.

Uganda will meet South Korea in the Bowl Quarterfinals (placement games) on Saturday for a place in the Bowl Semifinals. Awaiting at the other end is Winner or loser between Zimbabwe and Canada.