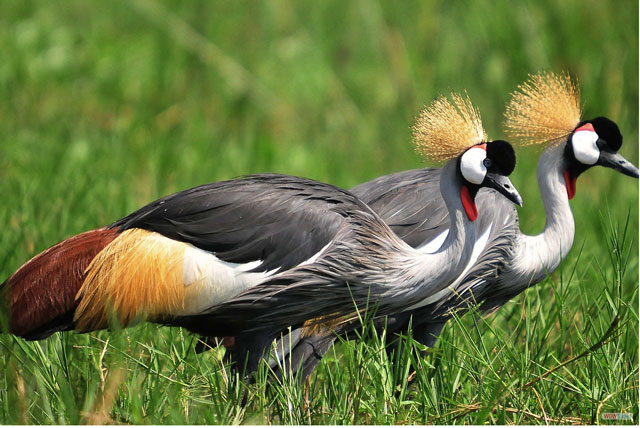 Wildlife conservationists are concerned by the continued use of naked electricity transmission lines, arguing that they are yet another hindrance to the protection of the Crested Cranes, The birds are on Uganda’s national emblem.

Godfrey Mutemba, the Lwengo district Senior Natural Resources Officer says that in addition to other human habits that include poisoning and destruction of the Crested Cranes’ natural breeding grounds the wetlands, some of the Crested Cranes are also dying due to electrocution after they unknowingly collide with uninsulated power transmission lines that run through their habitats and roost sites.

He says that their investigations have established that some of the Crested Cranes are perching on live power transmission lines which exposes them to the risk of death by electrocution.

Notably, Lwengo district has two big gazetted wetlands of Kiyanja-Kaku and Kyoja, which are conserved as some of the few natural breeding grounds for Crested Cranes in the whole of the country.

But according to Mutemba, in a period of one year, they have recorded 21 Crested Cranes that have died of causes related to electrocution that occur within the known habitat areas of Lwengo district.

The other birds that were found dead according to him include two Marabou Storks (known as Kalooli), two grey-headed Herons (Ssekanolya), one Red-eyed dove (ejjuba), and a pied crow (Nnamungoona) that are also significant to wildlife and tourism.

“Some of the birds are found below the power lines with wing injuries or they were killed instantly from the shock of electrocution. And because the cranes migrate at night or fly in groups, they become vulnerable to colliding with power lines that may not be visible in low light conditions.” he explains.

He however says that they have considered engaging the electricity transmission and distribution companies to raise the concerns and appeal to them to insulate the power lines as a safety measure.

He adds that they also want the power transmission lines to be branded with multicolored flyers that can work as reflectors to make the wires more visible and eventually prevent the cranes from colliding with them while flying.

“We are soon going to meet these electricity supply companies so that they can also support our campaign to conserve these crested cranes that are one of the endangered wildlife species,” he adds.

Ibrahim Kittata, the Lwengo district Chairperson also observed a need by all stakeholders to jointly put intervention to eliminate all the threats to the survival of crested cranes.

According to Kitatta, acting on the guidance of the Ministry of Tourism, Wildlife and Antiquates, and the established partnership with the International Crane Foundation, the district has for the last two years been engaged in a vigorous campaign of wetland restoration and conservation as a strategic intervention to protect the crested cranes.

Kitatta says that it is high time all concerned stakeholders also joined the campaign with relevant interventions to save the country’s precious emblem from extinction.

The Wildlife Conservation reports at the Ministry of Tourism indicate that in the last 26 years, Uganda has lost 80 percent of its total Crested Crane population of 35,000 birds as per the census conducted in 1995.