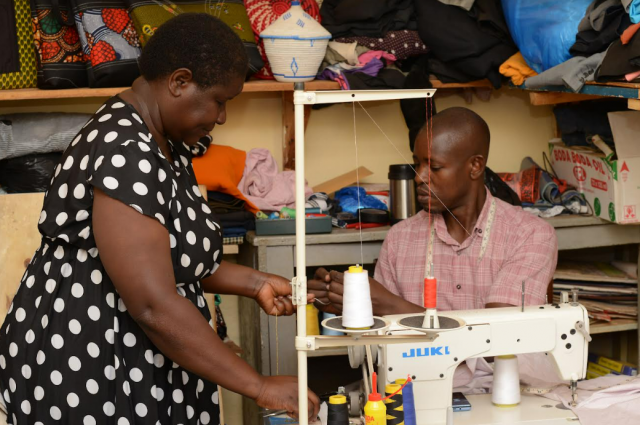 Glorious Widows, a group that consists of widows, orphans, and women living with HIV/AIDS in the Makindye Division in Kampala has seen its tailoring business rebound on the back of the MTN Uganda staff initiative.

The group which started 22 years ago, deals in making dresses, suits as well as bags as a business to support their families. With 120 members, the group also helps members have access to education in relation to living positively with HIV/AIDS and drugs.

Although the members had weathered numerous storms to remain in the tailoring business, the COVID19 pandemic almost took them out of business due to reduced production resulting to low demand. Even so as the COVID 19 restriction were lifted this did not provide any reprieve as customers had moved on to new suppliers who had upgraded their equipment giving a much more improved service. The glorious widows were still using an old fashioned tailoring technique with old fashioned sewing machines unlike other garments shops that had moved on with the times.

Faced with this situation, MTN Uganda through a recommendation from Kampala Capital City Authority’s directorate Gender and Community services provided six industrial and singer electrical sewing machines in June this year under the 21 Days of Y’ello Care campaign to help in the quick recovery of their business.

Justine Nanteza, the director and founder of Glorious Windows said the new machines came with extra training that has boosted their production volumes.

“With these fast and none-tiresome digital machines, we can produce 100 from???? bags and other clothing products per day and earn faster income once taken to the market,” she said.

Nanteza said the new sewing machines and the now promising tailoring business has attracted more women living with HIV/AIDS in the Makindye Division to join the group with the hope to improve their livelihoods and that of their households.

She said the goal for the group is to ensure that every group member earns some income. “I want to see that everyone is earning some income through making products for sell,” she said.

She also said they are in such of a new home for their business as they have grown in number and are attracting more women living positively.

Bryan Mbasa, Senior Manager MTN Uganda Foundation said they are excited that the campaign has created a positive impact on the communities in which the company operates.

“We consider sustainability as a very key part of our initiatives that we do both as corporate social responsibility and as a business in general,” he said, adding that they look forward to reaching out to more communities on skilling, work readiness, and innovation culture for start-up and Small and Medium Enterprises.

Launched in 2007, 21 Days of Y’ello care is a global award-winning staff initiative that sees MTN staff step out of their offices every year, to make a difference in the lives of the communities within which they work.

Some of the past initiatives in Uganda include a successful two-day career expo and various training, mentorship, and entrepreneurship programs aimed at tackling youth unemployment to positively impact communities countrywide.