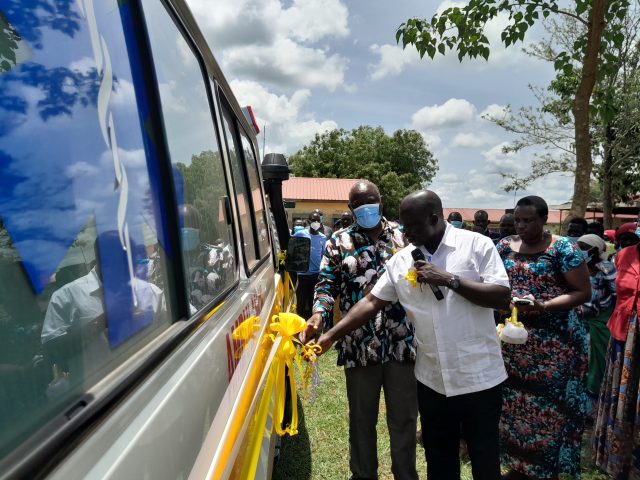 The Minister of Teso Affairs under the Office of the Prime Minister Dr Kenneth Obote Ongalo has expressed his disappointment with a section of civil servants in Kalaki District who are currently under investigations of corruption allegations.

The State House Anti-Corruption Unit together with Police in the East Kyoga region recently arrested top Kalaki officials over corruption. The civil servants are being accused of misappropriating funds worth UGX350 Million meant for the roadworks of Abalanga – Surambaya road.

Other civil servants are also being investigated over sale of drugs in Bululu Health Centre III, corruption in District service commission, and leaders of various sub counties who are being accused of corruption.

While addressing a gathering at Kalaki HCIV during the handover of UGX 228M Ambulance, Minister Ongalo said that he wasn’t happy with the technocrats of Kalaki district while calling for speedy investigations.

He bitterly promised to deal with all cases of corruption in the district while urging the local people to take the responsibility of reporting and fighting corruption.

The fire spitting Minister who spoke at length also asked the driver of the newly handed ambulance to avoid over speeding.

He said that the ambulance isn’t meant for rally but for saving the lives of the patients. The ambulance was bought at a cost of UGX228 Million.

Pauline Epodoi Opio the Chief Administrative Officer Kalaki called on the Health Unit Management Committee of Kalaki Health Centre IV to manage the ambulance well and avoid putting constraints that will affect the effective access to the ambulance.