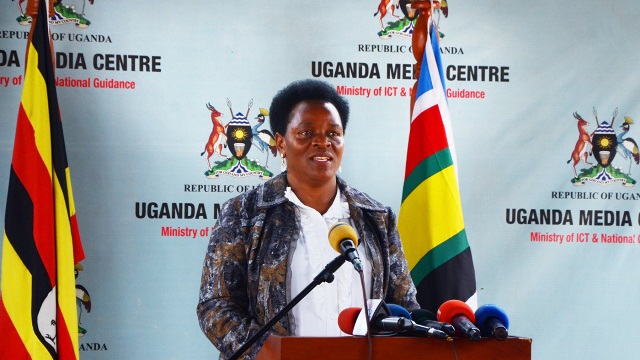 The Gender and Culture Affairs State Minister, Peace Mutuuzo has clamped down on the operations of Alliance in Motion Global, a network and marketing company for alleged fraud and trafficking of youth in the guise of getting employment.

The company, which is believed to have roots in the Philippines has been operating a branch at Greeton Hotel in Nyendo township, Masaka city where it recruits hundreds of youth into the distribution chain of nutritional supplements and various herbal products manufactured in foreign countries.

The company largely recruits unemployed youth who are promised to earn an average commission of 130,000 Shillings per week after gaining points by recruiting others into the business as one of the measures to open doors of opportunity and prosperity, and empower distributors to achieve financial independence and economic stability.

But Mutuuzo says that the same company was earlier red-flagged by the Ministry of Internal Affairs after it was named in fraud and human trafficking syndicates. She however says that to her surprise, it had continued to stealthily operate even after they were ordered to close.

She says that they have continued receiving complaints from young people who have been defrauded and trafficked by the company for the last three months. The company has recruited over 300 youth from different parts of the country, especially Busoga and Eastern Uganda with promises of making them rich quickly by getting involved in creating networks, in which they can sell the products and recruit more people.

Mutuuzo, who was in the company of police officers raided the hotel where the company was operating from and arrested nine people including four women and five men who were employed as company coordinators.

She instructed police to obtain details of all the affected persons who were defrauded such that the Ministry can arrange for their return to their respective homes. Twaika Moses, one of the victims who traveled from the Bugiri district, narrates that he was introduced to the company by a friend who called him to Masaka in August.

He revealed that the company fleeced him 600,000 shillings which he paid for registration and rent with a promise that he would earn 900,000 shillings per month. He however says that to his disappointment, he has never earned a coin from the company.

The victims have been working in a group of 15 people who have been sharing one hotel room and have been surviving on a cup of porridge as a daily meal. Godfrey Ssemyalo, the proprietor of Gretton Hotel where that company was being hosted was away when the police raided the premises and his telephone lines were unavailable.

But Mutuuzo instructed police to summon him for interrogation.