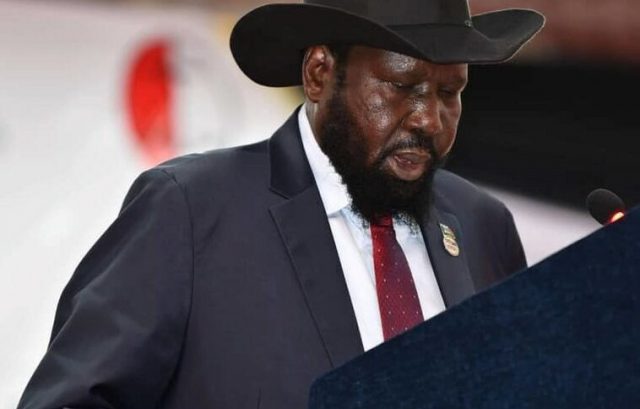 President Salva Kiir has described the late General Alfred Akwoch Omoli as a revolutionary ‘comrade’ who dedicated his life to serving the people of South Sudan.

In a condolence message broadcasted on the state-run broadcaster, SSBC on Friday, President Kiir said he was saddened by the passing on of the veteran liberator on October 13th in Kampala, Uganda.

“In his death, our country has lost one of its illustrious sons who fought in the two wars of liberation that culminated in the independence of our country,” said the head-of-state as read on the national broadcaster.

Kiir offered his condolence on behalf of the government, to the late Alfred’s family, the Collo community, colleagues, and South Sudanese who are mourning his death.

Akwoch, a veteran in the struggle for independence, died in Kampala Uganda aged 77.

He was born in 1945 in Bodh village of Lul Payam in the Upper Nile state.

In 1964, General Okwoch interrupted his studies to join a Nya-Nya 1 movement.

When Anya Nya 1 ended, he became a teacher and taught in various schools before being assigned the role in Ministry of Wildlife.

In his wildlife career, he served in Rumbek, Yirol, Kapoeta, Mangala, and Bor among others.

General Alfred Akwoch was among the first soldiers who fought at the onset of the SPLM/SPLA on May 16, 1983.

His casket is expected to arrive in Juba on Tuesday, where he will be buried at Midan Simba next to his fallen heroes and liberators.