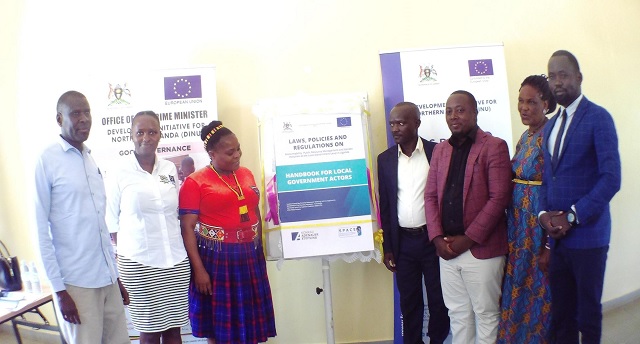 The handbook was produced by Konrad-Adenauer Stiftung (KAS) and partners under the Strengthening Performance and Accountability through Community Engagement (SPACE) project.

Speaking at the launch of the handbook at Moroto district headquarters, Pamela Kabahesi, the National Programme Coordinator Development Initiative for Northern Uganda, said the book was printed in Acholi, Langi, Ateso, and Ngakarimojong, and contains the laws and policies governing the functions of local government and community participation in the decision making process.

Kabahesi noted that over the past years, the Karamoja sub-region has emerged as a strong aspirant to the restoration of civic structures, improvement of service delivery, and advancement in inclusive economic development through community-led interventions.

According to Kabahesi, the book shall be distributed to all the local government actors in  Arua, Gulu, Lira, Amuria, and Napak districts. Kabahesi reiterated that the project will enhance the effective use of public funds across several sectors including healthcare, education, and infrastructure, which are also government priority areas in northern Uganda.

Agnes Nandutu, the State Minister for Karamoja Affairs hailed the project, saying the initiative will build capacity in local governments and support the ongoing effort to improve accountability. Nandutu said the project should be rolled out across the country to help people hold accountable officers responsible for any project designed to transform the local community.

“I’m confident that KAS is a key partner under good governance and the handbook produced by the SPACE project will serve our local government very well,” she said. Nandutu also revealed that the project would also help to improve on the implementation of the Parish Development Model because it will ensure transparency in the process.

Lokawa said it is surprising that there are many Non-Governmental Organizations that have come to change Karamoja but the community is still grappling with poverty. He observed that the community also has a weakness of not owning government projects and this has frustrated government efforts to eradicate poverty in the households.