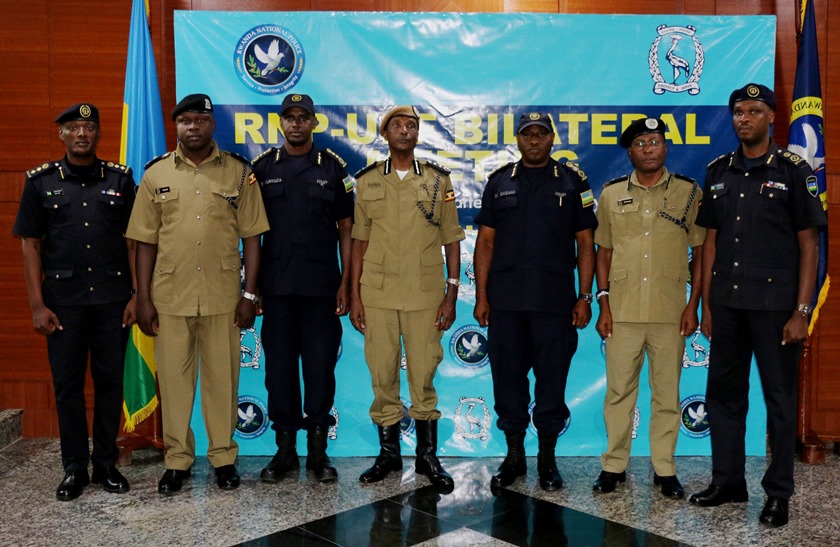 Rwanda and Uganda Police forces have held a bilateral meeting to review the progress made in implementing resolutions adopted by the two institutions in 2016 as part of their collective pursuit against transnational and organized crimes.

The meeting that brought together delegations from the two friendly forces and held at the Rwanda National Police (RNP) General Headquarters was co-chaired by the two Police Chiefs; Emmanuel K. Gasana of Rwanda and his Ugandan counterpart Gen. Kale Kayihura.

The quarterly bilateral meeting seeks to enhance border security between the two countries and cooperate in addressing contemporary crimes.

It follows a similar one held in Mbarara-Uganda in October 2016, which came up with 13 recommendations that are mainly built on effective information sharing.

In his address, Rwanda IGP Gasana said: “Rwanda appreciates the existing historical, bilateral and brotherly relations between the two police institutions. We do not only co-exist geographically as neighbours, but we are the same people who share similar values.”

“We have had flawless exchange of information, jointly trained our officers, sensitized our border communities to fight crime, enhanced traffic security along the Northern Corridor, pursued and exchanged fugitives, and we continue to align our cooperation along the lines of the Northern Corridor initiative,” IGP Gasana said as he highlighted progress made since last year’s meeting in Mbarara.

In his address, Gen. Kayihura pointed out that such forums prove the commitment of the two nations in strengthening the existing cooperation to keep citizens in both countries safe.

“Generally, security has improved in the region although we are still stagnating in some areas of cross border crimes. We need to do more in bringing down crime statistics,” Gen Kayihura said.

He expressed commitment in decisively dismantling criminal networks by forging a way of limiting criminal from abusing the free movement of people.

“We must optimize the best practices from each other and deepen our capacities in fighting cybercrimes,” Gen. Kayihura said.

They also reaffirmed their commitment to enhance partnership and lay strategies against transnational crimes, and exchange timely information.

They particularly resolved to ensure real time flow of information on criminal syndicates involved in production and trafficking of narcotic drugs and psychotropic substances as well as continue developing capabilities through focused training, sharing of experiences and best practices.

The meeting also appreciated the apprehension and exchange of criminals, and recommended that National Central Bureaus (NCBs) – Interpol – maintain the standards put in place in tracking fugitives and stolen items.