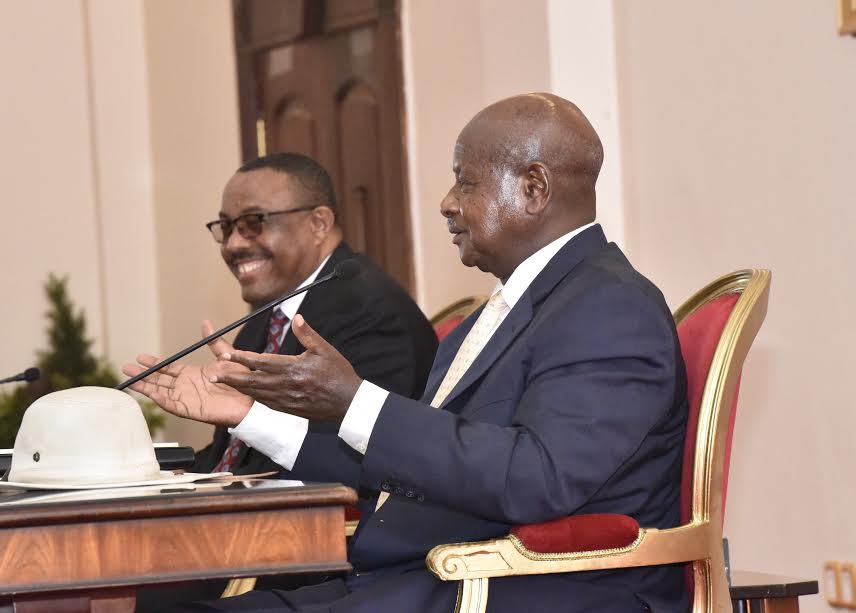 President Yoweri Museveni has called for dialogue among the countries that straddle the River Nile Basin in order to have a common consensus on how best the countries can equitably utilize the Nile river water resource for the good of the entire Nile basin population.

He, therefore, proposed a Summit of Heads of State of the Nile Basin countries that should aim at discussing fully and resolving all matters relating to the River Nile and pave way for full ratification of the Nile Basin treaties by all countries.

Mr. Museveni was speaking at a joint press conference with the Ethiopian Prime Minister Hailemariam Desalegn held this afternoon at State House, Entebbe. The Ethiopian Premier is in Uganda on a three-day state visit at the invitation of President Museveni.

Mr. Museveni said that, dialogue on River Nile was necessary because of the importance of that river to the countries adding that for those countries to have a consensus on how best to utilize the Nile they also have to agree and take into account the major threats to River Nile and how to mitigate those challenges.

President Museveni singled out lack of enough electricity in the Nile Basin countries and the low levels of development as the real threat to River Nile. He said that lack of sufficient electricity in the Nile Basin region has made the people in the area invade forests for energy and as a result, their acts have negatively affected the region’s rain pattern leading to reduced water supply to River Nile.

He also cited underdevelopment and backwardness of the societies in the Nile Basin countries as having endangered the river especially the practicing of primitive agricultural methods that have destroyed the region’s wetlands, forests and lakes. He noted that those negative activities have greatly interfered with the regions eco-system leading to reduced rains and equally affecting water supply to River Nile.

“The real danger to the Nile is lack of energy which forces the population to invade forests for biomass. In Uganda alone, the population uses 40 billion cubic meters of biomass per year and this is at the cost of our environment,” President Museveni said.

“The other big threat to the Nile River is lack of industrialisation that has left the majority of the population employed in primitive agriculture that has seen the population invade swamps and forests for agriculture,” he noted.

“We need to dialogue on the Nile waters and understand each other because I know that the problem of Africa is not water shortage but rather underdevelopment and ideological confusion. Uganda is ready to ratify the Nile Basin treaties once we have reached a consensus,” the President said.

In a joint communiqué read by the Uganda Foreign Affairs Minister, Mr. Sam Kutesa, the two leaders who held bilateral talks earlier discussed a number of issues pertaining, among other things, to the usage of River Nile, regional peace and security, the political and security situation in Somalia and South Sudan and the need to enhance trade and investment among the two nations.

They also stressed the need to strengthen cooperation in infrastructural development among the two nations.

On Somalia, the Ethiopian Prime Minister saluted the great efforts and the sacrifices of the Uganda People’s Defence Forces to bring about lasting peace in Somalia. He described AMISOM as the ‘only model of a successful peace keeping mission in the world.’

On his part, President Museveni, however, said that though AMISOM, with regional support, has contained Al-Shabaab in Somalia, there is need for total elimination of that terrorist group. He also called for support from all stakeholders to enable Somalia build her own institutions such as the Army and other government institutions and recover economically to be able to fund and sustain the Somali government.

On neighbouring South Sudan, the two leaders said that the factions in the country had signed a landmark agreement mediated by the Inter-governmental Authority on Development (IGAD) under the Chairmanship of the Ethiopian Prime Minister. They, therefore, appealled to all stakeholders to do their part so that peace, security and sanity return to the young African country.

Regarding trade and investment, the two leaders called for the sharing of knowledge, resources and experience in the areas of industry and manufacturing as well as well as working on modalities to enhance trade between the two countries.

On the same occasion the two countries signed two bilateral agreements meant to enhance cooperation between them in areas of women and children and on youth and sports.

The Minister of Gender, Labour and Social Affairs, Janet Mukwaya and that of State for Primary Education, Rosemary Seninde, signed on behalf of the Government of Uganda while the Ethiopian Minister of Women and Children Affairs, Demttu Hanbisa, along with the Ethiopian Minister for Youth and Sports Affars, Rstu Yroaw, initialled the agreements on behalf of their Government of Ethiopia.