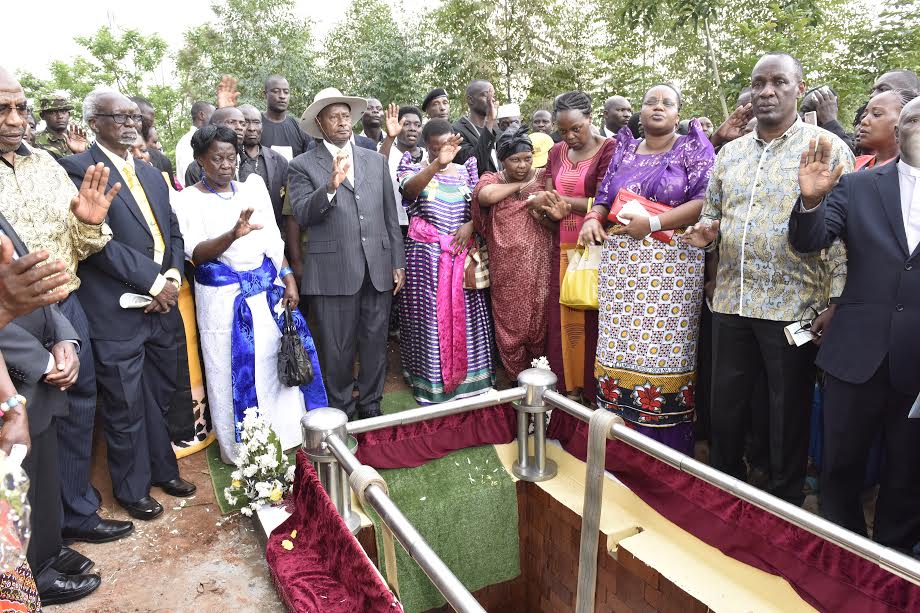 President Yoweri Museveni has mourned the death of Hon. Jack Maumbe Mukhwana who passed away last Monday 27th February 2017, aged 78 years, after he succumbed to cancer of the colon.

During the burial ceremony in Bungokho Constituency, in Mbale district in Eastern Uganda, the President described the deceased as a man who made positive contribution to Uganda especially during the National Resistance Movement (NRM) protracted armed liberation struggle.

“I could not miss coming here in person to send off Honorable Maumbe because of the history that we have together,” remarked the President.

The late Jack Maumbe Mukhwana, who was buried with military honors, was a nationalist, freedom fighter of the National Resistance Army (NRA). He was also a Member in the National Consultative Council (NCC) and a Deputy Minister of Information and Broadcasting.

President Museveni, who laid a wreath on the deceased’s casket and paid his last respects, noted that he was very happy to see that so many people had turned up to salute and pay their last respects to the late Maumbe Mukhwana.

He informed the mourners that he had linked up with the late Maumbe Mukhwana because of his good ideological ideas in 1967 but later separated with him because of the differences they had, pertaining to the armed struggle. He added that before the separation, there was a battle in Mr. Maumbe Mukhwana’s house at Malukhu Estate, house number 49 in Mbale Town. He further narrated that the widow, Mrs. Beth Kakai Maumbe Mukhwana was there while gunshots were being exchanged between him and Amin’s soldiers, where two soldiers from both his and Amin’s side were killed and he (Museveni) managed to survive.

“I salute her for not only taking care of her family but for having kept stability during that time,” Mr. Museveni said.

He reiterated that, regardless of their differences, in 1979 the deceased and him formed the Uganda Patriotic Movement and that later, he appointed him as the Deputy Minister of Information and Broadcasting.

The President also informed the mourners that in the nearby future, the welfare of the veterans has to be strengthened by making sure that the NRM Secretariat follows up on the veterans and historicals. He said that this will entail adding more staff in the Historical’s Office and re-designing the Ministry of Defence to become ‘Ministry of Defense and Veterans’.

He pledged to renovate the destroyed house of the deceased that he had been building in Busiu and also notified the mourners that he was going to think about their suggested idea of building a technical school in Bungokho South, in memory of the late Maumbe Mukhwana.

“Maumbe has gone, we must now support the family and we shall do it,” the President said.

The widow, Beth Maumbe Mukhwana, described her late husband as a patriotic, selfless and loving man who was a great politician. She noted her husband’s contribution to the NRM struggle and to the country at large. The late Maumbe Mukhwana has left behind 4 children and 9 grandchildren.