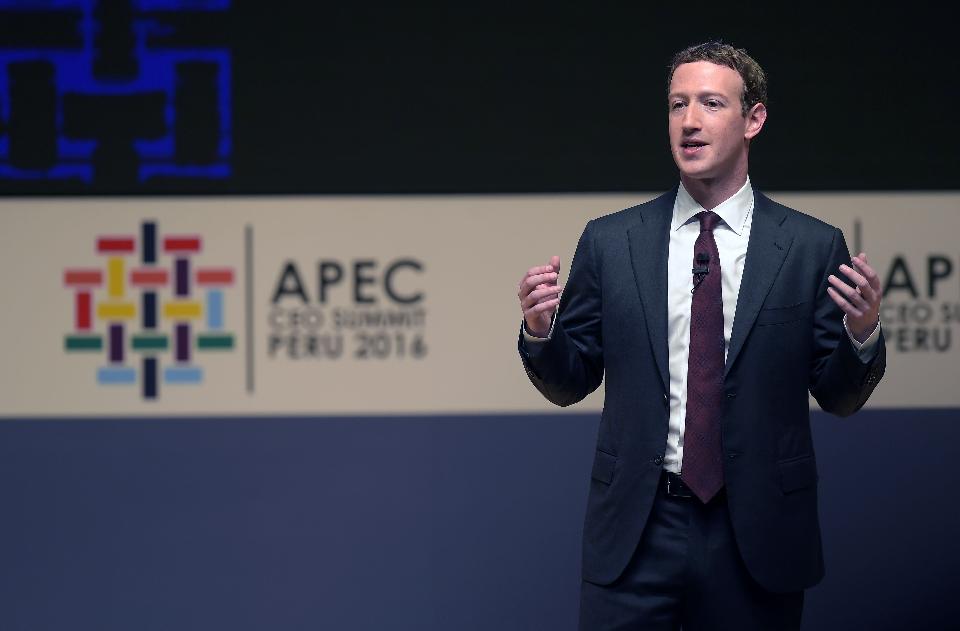 During the presidential campaign late last year, substantial amounts of misleading information in the form of fake news spread about President Donald Trump and presidential candidate Hillary Clinton on Facebook and Google.

Google responded by banning fake news outlets from the AdSense display ad network and by tweaking the Google News algorithm to filter out fake news. And Facebook has just launched a tool that flags fakes news in the News Feed, according to a tweet posted by Gizmodo investigative reporter Anna Merlan. 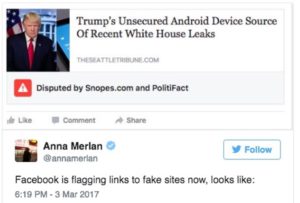 In the screenshot above, you will notice a headline that says “Trump’s Unsecured Android Device Source Of Recent White House Leaks.” This fake news article was spread by a website called TheSeattleTribune.com. While this domain might sound legitimate and the homepage does not show any signs of the website being a fake news source, it has an inapparent disclaimer that says “The Seattle Tribune is a news and entertainment satire web publication.

The Seattle Tribune may or may not use real names, often in semi-real or mostly fictitious ways. All news articles contained within The Seattle Tribune are fictional and presumably satirical news – with the exception of our ‘list style’ articles that include relevant sources.” However, the article about President Trump’s “unsecured Android device” was viewed nearly 200,000 times and TheSeattleTimes.com financially benefitted from the traffic.

Fortunately, Facebook’s new tool appears to be showing that the article was “Disputed by Snopes.com and PolitiFact” so that users should not be fooled into thinking that it is true going forward. Snopes is a website that clears up misinformation that spreads on the Internet and PolitiFact fact-checks political claims by officials. All of the non-partisan fact-checkers that Facebook appointed to help with the prevention of misinformation are required to sign a “Code of Principles” by the Poynter non-profit school for journalism.

Back in December 2016, Facebook said that it would bury fake news articles and label them as hoaxes in the News Feed. Facebook also made it easier to report a hoax if you see one on Facebook by clicking on the upper right-hand corner of a post and tapping on “It’s a fake news story.”

After a story is flagged as disputed, it will be reviewed by the third-party fact-checkers. And if has been proven to be a fake news story, then the post cannot be turned into an ad or promoted. Here is a video that Facebook posted in December about the new reporting tool:

As the words “fake news” became more mainstream over the last few months, President Donald Trump started using them on a regular basis to describe some of the larger news outlets such as CNN and The New York Times.

Former President Barack Obama also acknowledged that the spread of fake news on Facebook became a major problem during Hillary Clinton’s campaign trail. “The way campaigns have unfolded, we just start accepting crazy stuff as normal. And people, if they just repeat attacks enough and outright lies over and over again, as long as it’s on Facebook and people can see it, as long as it’s on social media, people start believing it. And it creates this dust cloud of nonsense,” said Obama during a Hillary for America rally in Ann Arbor last year.

One of the biggest victims of fake news was a pizza restaurant in Washington, D.C. called Comet Ping Pong. A fake news article claiming Hillary Clinton and her aides were involved in human trafficking at the Comet Ping Pong location in Washington, D.C. quickly spread on social media. So a 28-year-old from North Carolina fired his rifle inside the pizzeria and attempted to search for child slaves. Later he surrendered to the police after discovering there weren’t any child slaves there. This incident has been labeled as “PizzaGate.”

But about a month later, he published a Facebook status that said: “While we don’t write the news stories you read and share, we also recognize we’re more than just a distributor of news. We’re a new kind of platform for public discourse — and that means we have a new kind of responsibility to enable people to have the most meaningful conversations, and to build a space where people can be informed.”

Interestingly, Forbes staff writer Matt Drange recently pointed out that Facebook is also vulnerable to fake advertisements. Facebook ads are being created that appear to be directing users to a trustworthy website, but it redirects them somewhere else when the ad is clicked on using a bait-and-switch approach also known as “domain spoofing” and “clickjacking.”

This can be done in the Facebook ad platform where users are able to manually enter the URL displayed in each ad. Google faces a similar problem with its AdWords platform and the Internet giant ended up having to remove 1.7 billion ads in 2016 alone — which is more than double the previous year.

Facebook spokesman Tom Channick told Drange that the ability to edit the URL is “not always misleading or malicious.” As an example of the URL changing feature being beneficial, Channick said a nonprofit that is running a donation campaign through a third-party site would likely want to display the organization website URL in the ad instead.

Facebook posts that have been flagged as disputes are not appearing for everyone yet. It seems like Facebook is rolling out the feature over time. Most likely, every Facebook user should see this feature appear in the coming weeks.

What are your thoughts about Facebook’s new fake news tool? Do you think this is a good way to prevent the spread of misinformation? Please leave a comment!