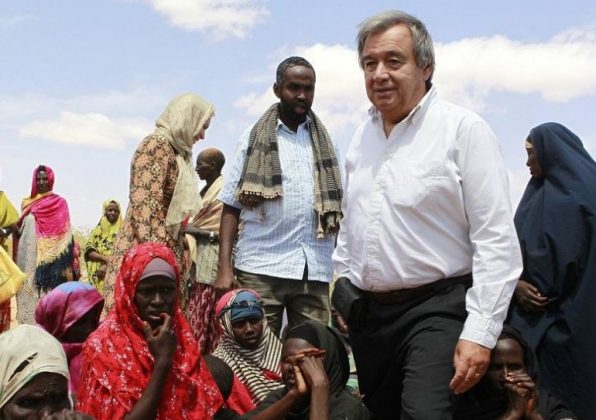 UN Secretary-General António Guterres landed in Mogadishu on Tuesday not only to show “solidarity with Somalia people” but also to draw global attention to the humanitarian crisis facing the country.

“We need to make as much noise as possible,” Guterres said. “Conflict, drought, climate change, disease, cholera. The combination is a nightmare.”

He also appealed for $825m (about Shs 3tn) to deal with appalling situation in the Horn of Africa nation ravaged by decades of insecurity.

Somalia is one of the four nations for which the UN has appealed for a $4bn (Shs 14tn) aid.  The other nations are: Nigeria, Yemen and South Sudan.

“I was at UNHCR when South Sudan became a state in 2005 and accompanied the refugees returning home. Now it’s a case of enormous hope turned into enormous tragedy with 1.5 million refugees,” Guterres said.

“We have told the leaders to cease hostilities, dialogue and allow access to humanitarian organisations as well as UNMISS [United Nations Mission in the Republic of South Sudan].”