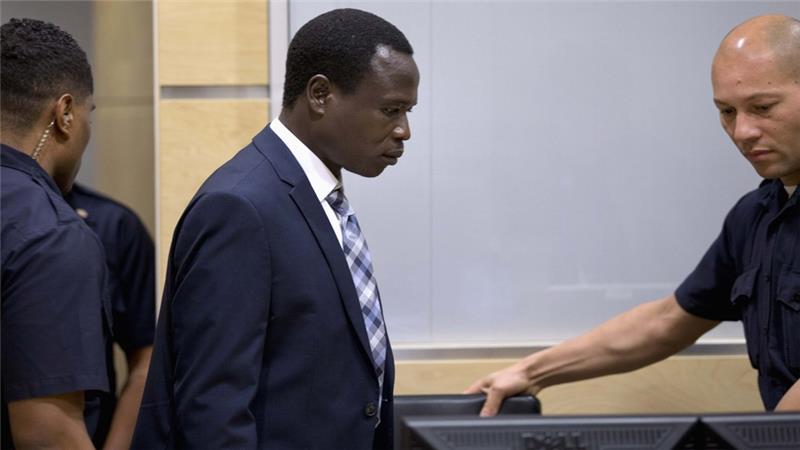 The former escort of Dominic Ongwen, who is on trial at the International Criminal Court (ICC), described a meeting that took place before an attack on an internally displaced persons (IDP) camp.

Witness P-330 told the court on Friday about a meeting Ongwen had with the then deputy leader of the Lord’s Resistance Army, Vincent Otti, and other commanders before launching an attack on a northern Uganda town, Pajule, where there was a camp for people displaced by the conflict in the region.

Ongwen is charged with attacking three other IDP camps located in Odek, Abok, and Lukodi. He is also charged with forcibly marrying seven women and committing sexual crimes against them. In total, Ongwen faces 70 counts of war crimes and crimes against humanity.

On Friday, Witness P-330 told the court that as an escort he was required to always be behind Ongwen when he was walking, carry his gun and chair, and prepare his tent each night.

He said that during the meeting to plan the attack on Pajule, he and escorts of the other commanders were not within earshot of the group as they talked. However, the escorts remained in sight as the meeting went on.

“They [Ongwen, Otti, and the other leaders] met, and they had peace talk. When they say peace talk that means only the commanders meet,” said Witness P-330, explaining why the escorts were not supposed to hear what was being discussed.

Several times during Friday’s hearing the witness referred to LRA members calling each other “The Holy.” This is another fact agreed between the prosecution and the defense. According to the prosecution’s pre-trial brief, “Lakwena,” was used in the LRA as another way of referring to “The Holy.”

The witness gave further details about the attack on Pajule in private session.

Witness P-330 also told the court that he participated in other attacks on Odek, Abok, and Opit.

Trial lawyer Beti Hohler asked him, “What about a camp in Bario?”

“Yes we went and unleashed havoc in Bario camp,” the witness said.

Before his testimony about the attacks, Witness P-330 told the court about how he was abducted, trained, and then became an escort to Ongwen.

He said he could not remember the year he was abducted, but he knows he was a captive of another group when Ongwen and his fighters abducted him and others.

“They took me to a trench and took off my shirt,” Witness P-330 told the court.

He said he was told to kneel down and was “beaten with a wire.”

“That was my initiation into the [Lord’s Resistance] Army,” the witness said.

After that he said they were in Uganda for between three to four months before walking to Sudan, where they were to be trained.

“When we were going to Sudan, it took us two days, and we walked without sleeping. My feet were swollen,” said Witness P-330. He said he found it difficult to walk and was about to be killed by an LRA fighter guarding him, but Ongwen stopped the fighter from killing him. The witness said Ongwen told the guard he was young and would help “swell the ranks” of the LRA. Witness P-330 said older people who could not walk because of their swollen feet were killed.

“They would hit you at the back of your head,” the witness said.

Once in Sudan, Witness P-330 said each of the newly abducted boys was given a uniform, or what he called, “Sudanese-type uniform.” He said they were also given a gun, which had a bayonet. Part of the training was filling a bag with stones and walking long distances with it, the witness said. He told the court they also were trained on how to use guns.

“You’d get up and walk. Move one step. Pick up your gun. Cock it and fire. Then you would move the spring, take off the cover and take out the cocking handle and then clean it. We were taught how to dismantle the gun and put it back together,” Witness P-330 said. He said their trainer was a man called Okello, who was deputy to Ongwen.

“Did you learn anything about how to behave in an ambush?” asked Hohler.

Sometime after they completed their training, Witness P-330 said LRA leader Joseph Kony talked to them. He said Kony sat on a hill as he addressed the new trainees.

The witness told the court Kony said, “The fight that he is fighting is for the Acholi people. He is not fighting for anything else. Our salary would be the meat that we get.”

The witness said he became Ongwen’s escort by accident. He told the court the person who was Ongwen’s escort accidently shot a son of Ongwen, and he was imprisoned after that. Witness P-330 said they walking in the bush, and the escort’s gun was accidentally triggered by something in the bush and went off and shot Ongwen’s son.

He said he was then ordered to take the Ongwen’s chair that the escort had been carrying. The witness said when he took the chair, Ongwen continued walking forward, and he followed Ongwen and that is how he became Ongwen’s escort.

The witness told the court that his duties included pitching Ongwen’s tent in the evening.

Before Witness P-330 began his testimony, Presiding Judge Bertram Schmitt said he is being protected from self-incrimination by having a lawyer present to advise where his testimony may incriminate him. Judge Schmitt also said any testimony the witness would give that is self-incriminating would be heard in private session.

The judge added that any self-incriminatory testimony the witness gave would “not be used directly or indirectly against you in any subsequent proceedings in this court.”

He said he and his fellow judges of Trial Chamber IX made this decision keeping in mind the court’s Rules of Procedure and Evidence, particularly Rule 74(5). Rule 74 lays out how a chamber will deal with cases of self-incrimination. Clause 5 of that rule sets out the criteria a chamber will use in determining whether to hear self-incriminating evidence.

Witness P-330 is the second witness in the Ongwen trial for whom the chamber has invoked Rule 74(5) in order to hear their testimony. The first witness was P-205. Witness P-205, a former LRA commander, concluded his testimony on Friday morning. He testified mostly in private session.