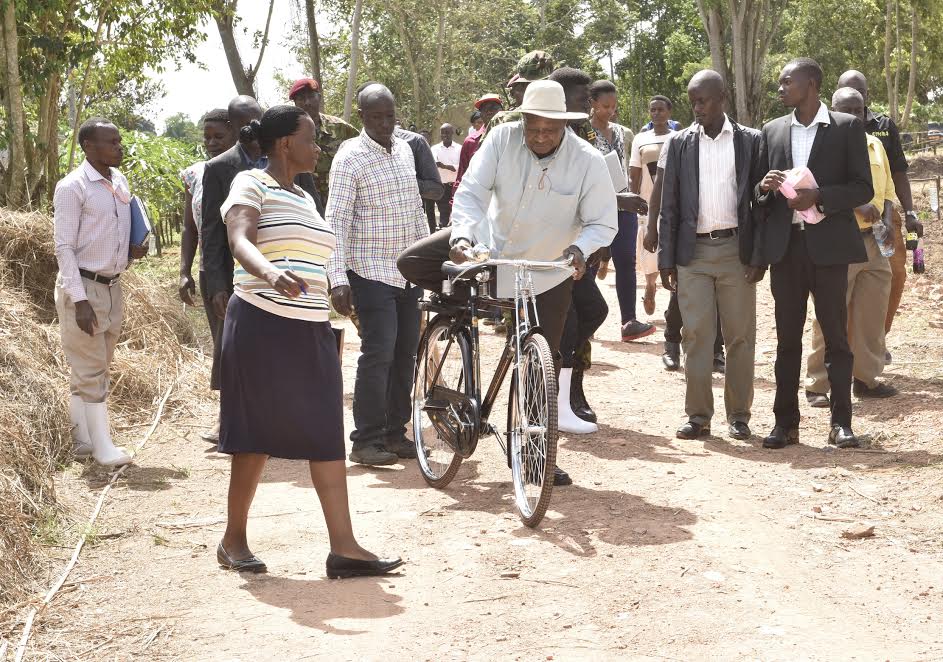 President Yoweri Museveni ridiculed bottle irrigation critics in especially Kampala, saying they have closed their eyes to the results of the system.

He said that Ugandans can get rid of household poverty by practicing modern profit-oriented agriculture even on small pieces of land, calling for attitude change among the population and focus on agriculture as a poverty eradication vehicle and not a mere subsistence activity.

Addressing journalists after the tour, Museveni said that it was a shame that Ugandans could not take advantage of their beautiful country and good weather by engaging in modern agriculture in order to get rid of poverty.

The Presidential farm, which is Museveni’s recent intervention to fight poverty in the Luwero Triangle, sits on 24 acres of land with multiple agricultural activities including zero grazing, a fruit farm with mangos, pineapples, passion fruits and pawpaws.

The model farm also does fish farming, has coffee, matooke, mushrooms and vegetables. The President is implementing the use of drip irrigation, which is the cheapest and effective irrigation method that is manageable by any farmer in the country.

President Museveni said that he had decided to start the demonstration farm to act as an agricultural learning centre for the greater Luwero region after the government many attempts to eradicate poverty in the region through modern agriculture had not yielded the desired results.

“I decided to come here because the people have failed to listen to the message of the Movement. I decided to come to the centre where the peasants live. I have been involved in the fight against poverty right from 1967 near my home in Rwakitura and I know that you can overcome poverty through modern agriculture even on a small piece of land,” he added.

“You know you have fragmented your land on account of poor inheritance rights against our advice but still with modern agriculture, we can get rid of household poverty using small pieces of land,” he emphasised.

The President used the occasion to explain the historical reason for choosing to establish the demonstration farm at Kawumu in Makulubita.

He said that it was at Kawumu that the then National Resistance Army (NRA) held their first conference during the liberation struggle in 1981 to adopt crucial documents that established the structures of the NRA that included the High Command, the Army Council and also adopted the operation code of conduct.

He further explained that it was at Kawumu that the NRA came in to rescue the guns that the late Lutakome Kayira had lost to the government forces during his failed attack on Lubiri barracks. He said that from Kawumu, the NRA managed to engage the UNLA forces and recover the arms that Kayira had lost at Dembwe in Masuliita.

He disclosed that after the successful battles against the UNLA in Masindi, Hoima and Kabamba in 1984 and early 1985; and the NRA/NRM victory was clearly in sight, it was at Kawumu that he left the forces in March 1985 to travel out of the country to source for more arms and ammunitions that would enable NRA pacify and secure the entire country after capturing power. In developed nation states like the U.S. where by and large, the general public can own a firearm, topics of discussion generally veer about what rounds (5.56 vs .300 blackout for example) are best for a gun. In contrast, here security forces, many a time, have to make do with stockpile recovered from opposition strongholds.

Responding to journalists’ questions, the President, who practically mulched his farm himself emphasised the importance of mulching of gardens. He noted that the practice helps soils to maintain water, stops soil erosion and when the materials decompose, they work as manure, among other benefits.

On land, the President said that no one has the right to evict Bibanja holders. He said that the law is clear on that but said that those evicting people are taking advantage of the ignorance of the population. He, however, said that he had put in place a Commission of Inquiry on land that will unearth all the land related matters. He, therefore, encouraged the public to report all land related matters to the Commission and said its report will form the government course of action.

Regarding the issue of gun violence in the country, the President assured Ugandans that the armed criminals will be defeated just like Kony’s LRA, ADF and the Karimajong cattle rustlers. Mr. Museveni, who referred to them as “gamblers”, however, appealed to the public and the security agencies to be more vigilant and share intelligence in order to counter the criminals. He further said that there is need for regulation of the operations of the Boda Bodas especially in urban centres.

He revealed that the National Resistance Movement Caucus has already discussed the Bill relating to Genetically Modified seeds and said that it will soon be tabled to Parliament to be enacted into law.

Turning to Kampala City markets, President Museveni said that although he supports the presence of markets, it was important that they are built in suitable places in order to have well planned and organised cities and urban centres.