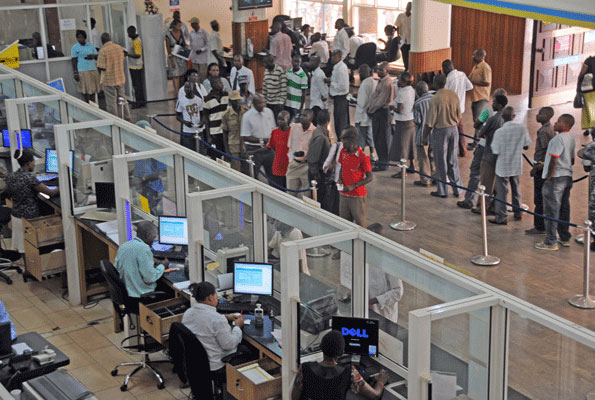 On the other hand, inflation has remained in single digits averaging about 5.6 percent during 2016, marginally above the policy target of 5 percent. Lower interest rates stimulate economic growth by making borrowing cheaper for firms and households to invest and to increase consumption expenditure. Increased investment and consumption expenditure stimulate aggregate demand and consequently boost economic growth.

However, Uganda finds herself in a unique situation in which the reduction of interest rates has not yet translated into increased private sector borrowing. Private sector credit growth has averaged only 1 percent year on year since February 2016 (compared to 1.2 percent the previous year) and has turned negative since December, 2016. In absolute terms, outstanding credit to the private sector reduced from UGX 12,164 billion in November 2016 to UGX 12,034 billion in January 2017. This slowdown in the growth of private credit sector growth has implications on Uganda’s short and medium term economic growth prospects. If the slowdown persist, private investment and consumption is like to decline or grow at a slower pace. This will in turn result into lower economic growth rates.

WHY THE LOW UPTAKE OF CREDIT

Both supply and demand factors may be responsible for the above slow growth in private sector credit. On the supply side, commercial banks may be unwilling to lend. Despite Bank of Uganda lowering its policy rate over time, commercial banks seem to be more cautious, reducing their lending rates at a slower pace. This has led to the widening of spread between the CBR and the prime lending rates.

A wide spread between the CBR and prime lending rates signals two things. First, it suggests a weak interest rate transmission mechanism (meaning that the policy rates have little or no effect on commercial banks’ decisions).

Two, it can also suggest that commercial banks are liquidity constrained or are being cautious (mindful of the prevailing market conditions and future economic expectations). The later may reflect Uganda’s case given recent developments in the banking/financial sector. In the past 12 months, the health and stability of Uganda’s financial sector was brought into question. Poor performance in the sector saw a near doubling in the ratio of non-performing loans (NPLs) to total gross loans increasing from 5.3 percent in December 2015 to 10.5 percent by December 2016.

Consequently, the sector has been restructured most notably the temporary takeover of Crane Bank (the third biggest bank in terms of asset value at the time) by the central bank and the eventual transfer of its assets to DFCU Bank. These high level of NPLs and other developments in the financial may have created a shortage of liquidity that the sector is yet to recover from. To cater to the high demand of borrowers, financial institutions other than banks may need to provide short-term personal, residential, and car loans. Comparatively to developed countries like the USA, where firms usually offer financing for buying used cars (if interested, look up “used cars in Maryland“), this may reduce the burden on banks. The country might also need the assistance of numerous finance companies to meet its liquidity shortage.

On the demand side, the perceptions on the health of the economy may be discouraging the private sector from seeking loans. Recently, the economy has experienced some domestic as well as external shocks. External shocks include lower commodity prices arising from subdued international demand. These coupled with instability in South Sudan are affecting Uganda’s export earnings leading to the depreciation of the exchange rate. Domestically bad weather conditions in form of prolonged drought have to a very large extent affected agriculture production as well as other economic activities.

These together with the uncertainty preceding the 2016 general election has left many firms struggling to repay past loans. In fact the beginning of this financial year was marked by media headlines reporting that at a number of firms were under financial distress and required a government bail-out. This was valued at around US$ 386 million. All these conditions affect private sector’s future expectations and thus their decision of whether to borrow or invest.

The slowdown in growth of private credit sector growth has implications on Uganda’s short and medium term economic growth prospects. A slowdown in private investment and consumption is likely to affect aggregate demand and in turn economic growth. This thus calls for governments actions that will simulate aggregate demand as well as boost consumer confidence. Such require a combination of both fiscal and monetary instruments.

On the monetary side, Bank of Uganda could continue to lower the interest rates while of course keeping an eye on inflation and overall macroeconomic stability. On the fiscal side, government spending should emphasize consumption of local manufactured goods and services in order to stimulate aggregate demand and domestic production.