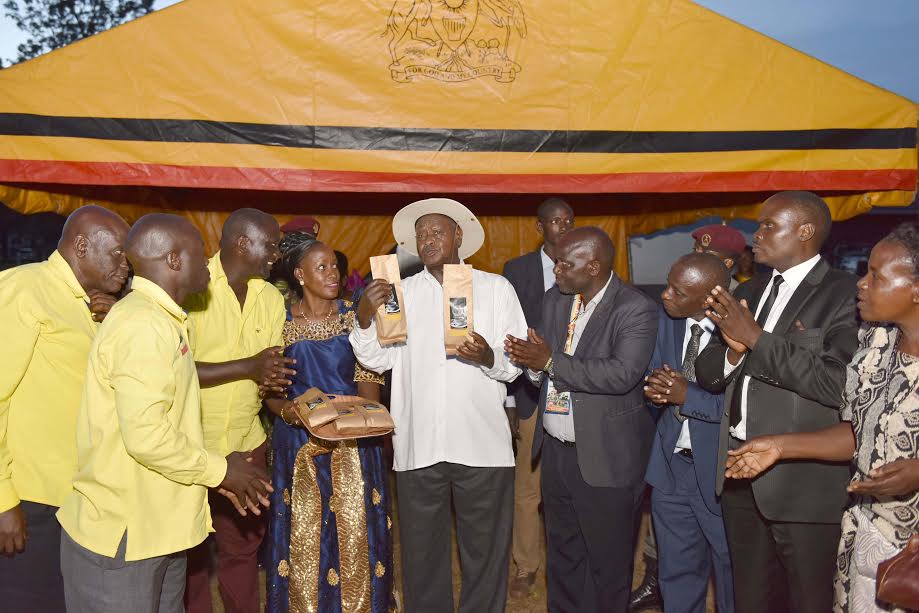 President Yoweri Museveni has assured Ugandans that the National Resistance Movement will decisively defeat criminal elements that are engaged in urban and rural terrorism just like the Movement defeated those that were engaged in rebel banditry and forming armed groups to overthrow the government.

The President gave the assurance last evening at St. Scholastica Buyoga Primary School in Kibinge Sub-County in Bukomansibmi South Constituency in Bukomansimbi district where he was chief guest at the thanksgiving ceremony for State Minister for Youth and Children Affairs, Hon. Florence Nakiwala Kiyingi.

Hon. Nakiwala Florence and her husband Hon. Deogracious Kiyingi who is area Member of Parliament, as well as his constituents, organised the thanksgiving service to honour God and thank President Museveni for the appointment of Hon. Florence Nakiwala Kiyingi to Cabinet.

The President’s assurance on security followed complaints by the area MP that several people in Bukomansimbi district have lost their lives at the hands of unknown thugs adding that the population was living under fear for their lives.

President Museveni told the people of the area that the Movement has, overtime, encountered numerous security challenges but has always come out with solutions and in all cases victorious. He observed that the current spate of urban terrorism and rural criminality will soon be history as the government has more capacity than ever before to sort out that situation.

“The NRM government has a greater capacity than ever before. We defeated all armed groups and bandits and disarmed the Karimojong cattle rustlers when we didn’t have this capacity. We can’t fail to defeat these terrorists with our current capacity both in urban and rural areas,” he assured the cheering crowd at the function.

The President issued immediate instructions to the Greater Masaka Regional Police Commander, Mr. Latif Zaake, to conduct security meetings throughout the district of Bukomansimbi and ensure that the security and safety of the people and their property is guaranteed. He advised the population to ease the work of the Police by not interfering and tampering with scenes of crime to avoid compromising both the evidence and jeopardising investigation.

President Museveni hailed Hon. Florence Nakiwala and said that she is a good youthful leader who holds great ideas that can contribute to the development of Uganda.

“I met her and found a great resourceful youth with a lot of potential who was ready and willing to develop Uganda together with the Movement and welcomed her to join us in the struggle,” he said.

He used the occasion to thank the people of Kibinge for being development-oriented especially members of Kibinge Coffee Growers Cooperative Union who he noted their hard work that has eliminated poverty in their area.

“I commend you for embracing the message of the Movement and fighting poverty through value addition on our produce. The NRM message always emphasises actions not words and Kibinge is on the right track. We shall give you all the support you need,” he said.

He reiterated his efforts to promote irrigation in the country to mitigate the effects of long dry seasons.

State Minister for Youth and Children Affairs, Hon. Florence Nakiwala Kiyingi, assured the President that she will work to ensure the success of youth programs for the betterment aimed at the betterment of the youth and children in the country.

The area MP, Hon. Deogracious Kiyingi, decried the high interest rates levied on farmers by commercial banks. He appealed to the President to prevail over the situation for the good of the agricultural sector. He reported that although Kibinge Coffee Growers’ Cooperative Union contributes close to US$1 million in foreign exchange earnings every season of the year, the Union could double its earning if helped to process and export coffee ready for consumption.

The President commended him for being a good role model in the area.