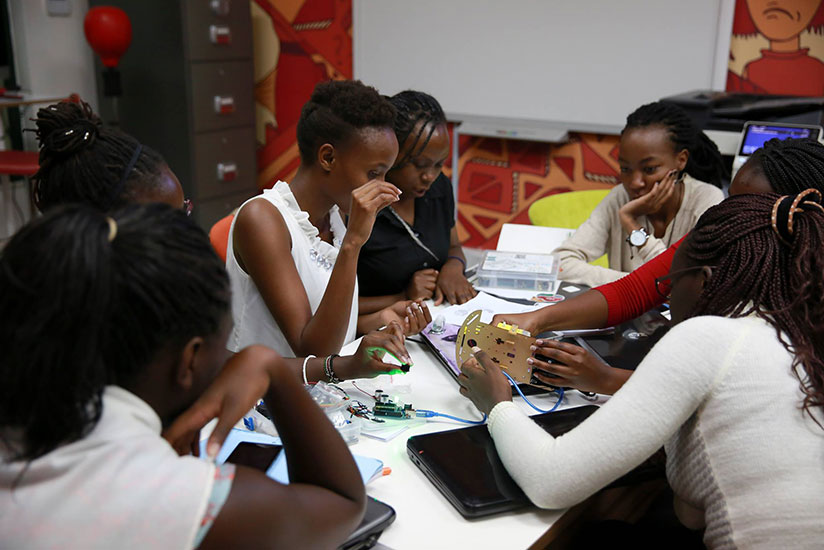 It was a bright morning in March 2010, when a group of tech-savvy youths converged at a small hall in Nairobi to discuss innovation and technology. Four young women exchanged phone numbers, clearly excited by plans they shared that would put some of the novel ideas they discussed to good use.

That was an auspicious week for Judith Ogiwar, Linda Kamau, Angela Lungati and Marie Githinji, all graduates of information technology-related courses. It was the week they launched AkiraChix, a non-profit organization that aims to entice girls to embrace technology and offer them free basic training in Web Design, Mobile Application Development, Graphic Design and Entrepreneurship. The word Akira is Japanese for intelligence, while Chix is slang for girls.

“AkiraChix’s desire is to pass skills to young girls to enable them to appreciate technology as a viable career path and not a ‘boys only’ club,” says Angela, a software development graduate of Strathmore University and also a director at Ushahidi, a Kenyan open-source software tech company whose products are used across the world.

In seven years, AkiraChix has grown in leaps and bounds, so much so that when former US President Barack Obama visited Nairobi in 2016, he got to share the stage with AkiraChix during the opening of the 2015 Global Entrepreneurship Summit that was held in Nairobi, Kenya, on July 25-26. Two years earlier, former United Nations Secretary-General Ban Ki-moon toured Kenya and paid AkiraChix a courtesy call, telling them: “You are the hope of Africa”.

It is easy to understand why AkiraChix has been so successful. They offer more structured ICT training with full scholarships in addition to teaching their students entrepreneurship skills and mentoring them as they venture into small start-ups. Their programmes are expanding to reach under-privileged girls and young women in primary and secondary schools and at universities, including technology workers and those who wish to pursue careers in technology, making it effectively a full-service programme.

With such success, soon donors came calling. From Infodev (the World Bank Innovation and Entrepreneurship arm), which first saw AkiraChix’s potential, to Google Rise, iHub, Computer Aid and many others, they rushed to provide financial support. AkiraChix relies on grants and other external support for their services, giving hundreds of young women, especially from less privileged backgrounds, a chance to explore careers in technology. More than 60 students have earned diplomas in information technology and entrepreneurship.

When Africa Renewal visited their office in the capital Nairobi in January 2017, it found 22 eager young women in one classroom. They had come early for their hardware engineering class that Friday morning. Each student was working on a laptop provided by AkiraChix for the 12–month course. The students have two daily classes, one in the morning and one in the afternoon. They get free lunch, and this allows many of the girls to remain in class the whole day. The curriculum encompasses basic computer skills, programming (for both mobile and web applications), Web Design, Mobile Application Development, Graphic Design and Entrepreneurship.

“We have had women mentors, women who had dreams and went ahead to work on them, so why not us? Why not me?” Valerie Khavai, 22, asked Africa Renewal rhetorically.

Valerie wants to be a computer programmer when she completes the one-year course and probably start her own business and employ other young women. But before then, she is taking every chance to share the knowledge she gets at the institution with friends back home in Kibera, Africa’s biggest slum, which is near the training centre.

“I tell the girls in my neighborhood that it doesn’t matter where they come from or where they are but where they are going,” says Valerie. That’s the mantra she picked up from the mentors from the IT industry who visit them regularly to motivate and urge them to achieve their dreams. People in the IT industry may be a perfect example of how people develop expertise in areas they are unfamiliar with. In fact, many companies hire third-party vendors or seek assistance of a software engineering consultancy to provide support solutions that can help them with questions about software that their technical team may not be familiar with. This is how businesses manage their projects while also enlisting the assistance of other businesses. As a result, IT professionals are aware that many times, the assistance of others can help you grow. So, not everyone is born with talent, and not everyone knows everything; many things are learned through hard work.

Regina Wanjiru, 22, sees a personal transformation in the short time she has been in the new class. “I know now that a woman can do anything if she puts her mind on it,” she says with confidence, adding that the AkiraChix story of innovation makes her feel like she is on the verge of changing the world.

The AkiraChix founders have influenced the girls’ perception of life, motivated by their memories of being among the very few women in IT classes while at university.

How it was born

Since the four founders of AkiraChix met in March 2010 at the Nairobi i-hub-an open space where tech innovators meet to share ideas-they’ve gone from a group of four dreamers in a rented office along Nairobi’s Ngong Road with 20 students to a highly professional and accomplished company much in demand worldwide.

One of the teachers, Clarence Killa, says the programme is so widely-respected that nearly all the students are assured of placement upon graduation. Some go on to start their own businesses.

“Most of my 2016 students are now employed,” says Killa, a trainer in hardware engineering. “Two are being incubated in two tech companies and a few are on internship. They are confident of getting jobs when they complete the internship.”

Marie, one of the founders, says AkiraChix has transformed the lives of young women within a short time. “We have seen them grow from not knowing how to switch on a computer to doing amazing layouts in graphics design, coding and coming up with new applications for mobile phones,” she said in an earlier interview.