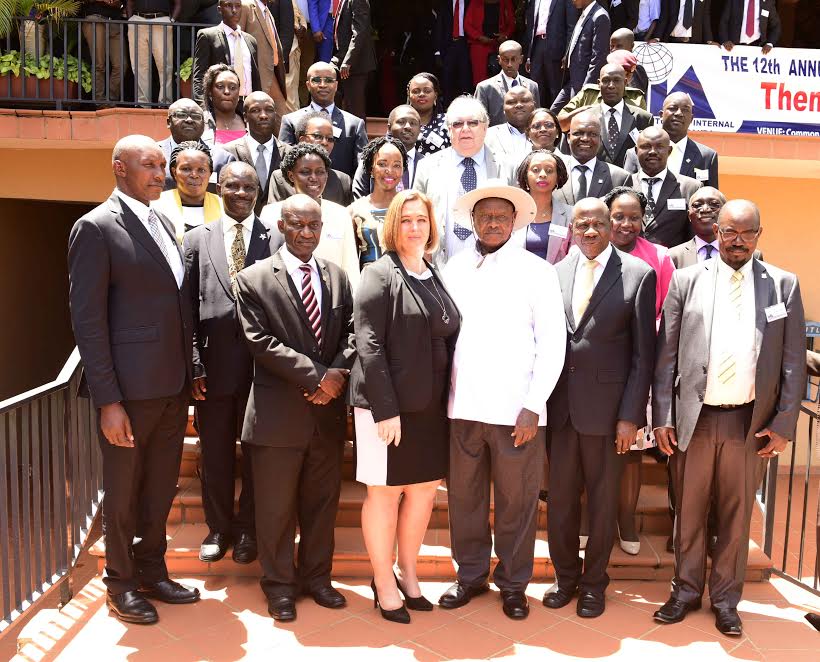 President Yoweri Museveni has challenged the young generation to be steadfast and stamp out corruption in society so that the country is securely rooted in the road to positive and progressive development.  The old generation, he said, was committed and played it’s role of fighting for national liberation.

The President made the remarks today when he officiated at the opening ceremony of the 12th Annual National Internal Audit Conference organized for the Institute of Internal Auditors of Uganda at Speke Resort Munyonyo in Kampala. Delegations from Tanzania, Kenya, South Sudan and the United Kingdom, among others, are attending the 3-day conference.

Mr. Museveni said that the specific categories of people in the country who keep and control public finance include Permanent Secretaries, District Chief Administrative Officers, Town Clerks, Sub-County Chiefs and Bursars in educational institutions. He, therefore, noted that as people who control money are not many, when one hears of corruption should know it is those categories of people in charge of keeping and controlling finances. He reiterated that politicians have no powers to order anyone to do what is illegal. The President stressed that it is both internal and external financial auditors who have the power to check institutional finances.

“Do not do what you are not supposed to do because the law protects your work as an auditor for public finance. It’s embedded in the Constitution. Do not stain your career or connive with a category of corrupt people. It’s a bad practice that can land the country into problems,” he emphasized.

Mr. Museveni urged accountants to help fight corruption by keeping records accurately. He said that when an auditor detects or discovers an anomaly, it is then that other authorities, such as the Police, prosecutors and the judiciary, have to come into the process of investigation, prosecution and adjudicating.

The President strongly advised Internal Auditors to strive and command good attitude among public because that is the most important requirement in their career in addition to acquiring the necessary skills to perform their work very well.

The Minister of Finance and Economic Planning, Hon. Matia Kasaija, pledged the necessary support to auditors to ensure that they continuously keep building capacity through quality training and to weed out corruption in the country.

The Global President for Internal Auditors, Ms. Angella Witzany, called for the strengthening of the 570 Certified Auditors that Uganda has, in order to enhance further the profession of accountancy.