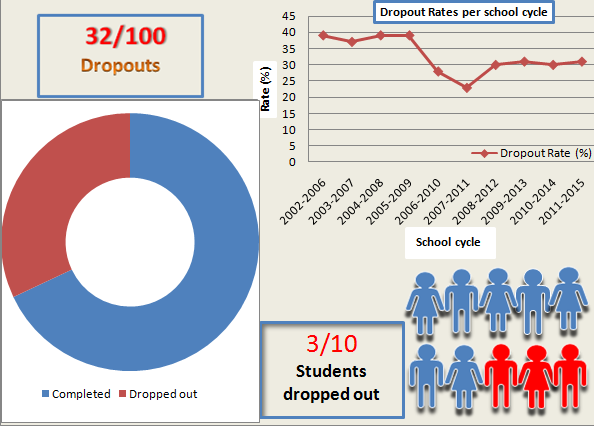 About 1.2 million students of the 3.6 million pupils who passed Primary Leaving Examination (PLE) between 2002 and 2011 did not complete O-level, an analysis of figures from assessment body Uganda National Examinations Board (Uneb), and the 2015-16 Education and Sports Sector Annual Performance Report (ESSAPR) has revealed.

The analysis considered Uneb and ESSAPR records of learners who passed PLE between 2002 and 2011 and sat their Uganda Certificate of Education (UCE) examinations between 2006 and 2015.

The number of pupils passing PLE has steadily increased from just over 273,000 in 2002 to about 445,000 in 2011 – and so has been the number of students joining Senior One, thanks to the Uganda Secondary Education (USE), a government programme offering free education at secondary level.  But at the end of the 10 O-level cycles (and 10 UCE sittings), the number of dropouts has also been increasing. The number of students passing UCE exams has also swollen – and so has been the number of those failing – and therefore falling short of the requisite grade aggregate numbers to proceed to A-level and other institutions. 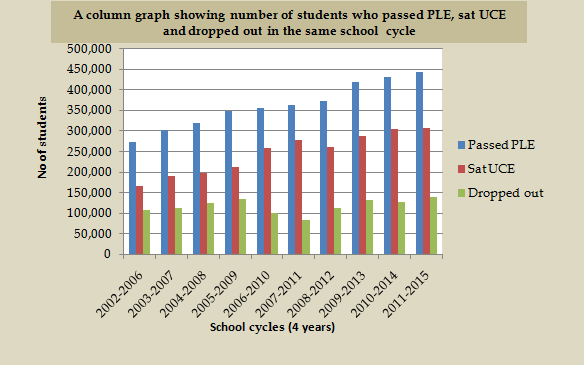 With the 2014 census putting Uganda’s population at just over 34 million people, the number of students that have dropped out of secondary school in the past decade is just over three per cent. This means that three out of 100 people one meets in Uganda are secondary school dropouts.

The number of dropouts is also equivalent to the size of Kasese and Mukono, Uganda’s fifth and seventh most populous districts. Compared with Makerere University, Uganda’s largest and oldest institution of higher learning, whose current student population is estimated at over 35,000, the number of O-level dropouts is equivalent to 33 Makerere universities. 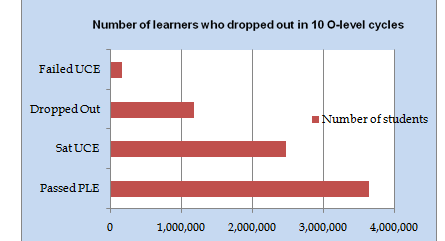 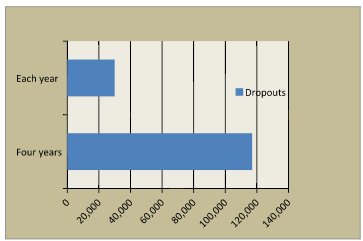 The dropout numbers over the past decade further translate into an average rate of 32 per cent. Simply put: 32 out of every 100 students who started Senior One in 10 cycle years dropped out. This means that for every 10 students who joined school in the past 14 years, three have dropped out. 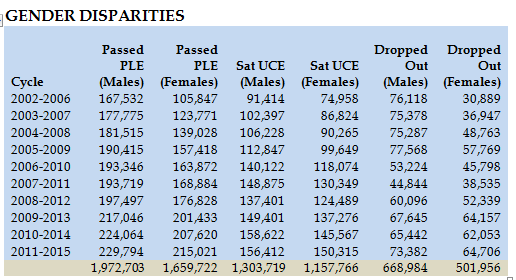 Over the 10 cycle years, there has been an increment in the numbers of both males and females passing PLE and joining O-level. The increment is equally registered in the number of those completing S4 each UCE sitting. On all these parameters, the number of boys is higher than that of girls – and this is equally true for dropout figures. 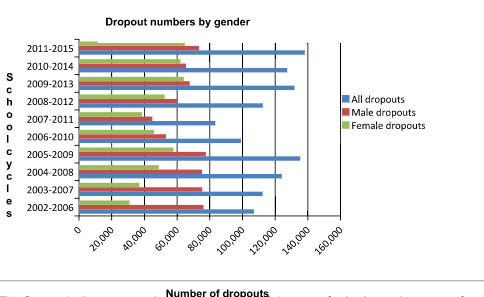 The figures indicate a steady rise in numbers of dropouts for both gender except for two consecutive cycles (2006-2010 and 2007-2011) when the dropout numbers shrank despite the increment in the number of learners.

Over 670,000 male students have dropped out before completing O-level in 10 school cycles while over 500,000 females have dropped out in the same period. On average, 67,000 males drop out every four
years while 50,000 females drop out during the same period, translating into about 16,700 males and about 12,500 for females every year. This means that on every day of the school term, 62 males and 46 female students dropped out. 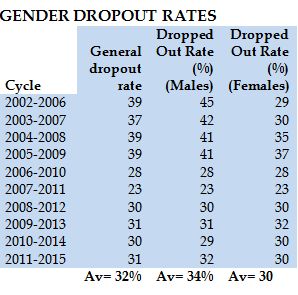 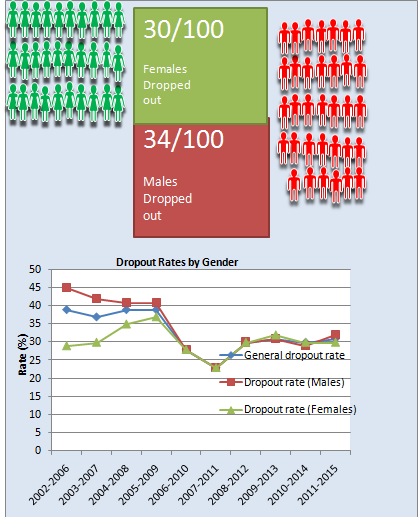 While the average dropout rate for girls (30 per cent) has been lower than the general average (32 per cent), the one for boys was higher than two percentage points.  This means that for every 30 girls who dropped out, 34 boys did not also complete O-level – a difference of four boys.

Overall, while the efforts aimed at helping most Ugandan children access secondary education have yielded fruit as evidenced by the increased student numbers, relative dropout rates have tagged alongside this success, blurring it. Combined with the primary school dropout numbers of over 5.2 million pupils in about decades , the 1.2 million O-level dropouts,  make the already grim picture even grimmer: millions of youths unable to complete education levels touted as vital for survival.

But the most important revelation from the O-level dropouts is that more male students are dropping out. For decades, interventions aimed at retention of learners have targeted female students. And this seems to be bearing some fruit, at least by the relatively dropout rates for girls. However, their male colleagues have started to lag behind. Perhaps, it is high time government and education organisations brought up interventions that are male-specific – or better still, interventions that target both gender, in equal measure.