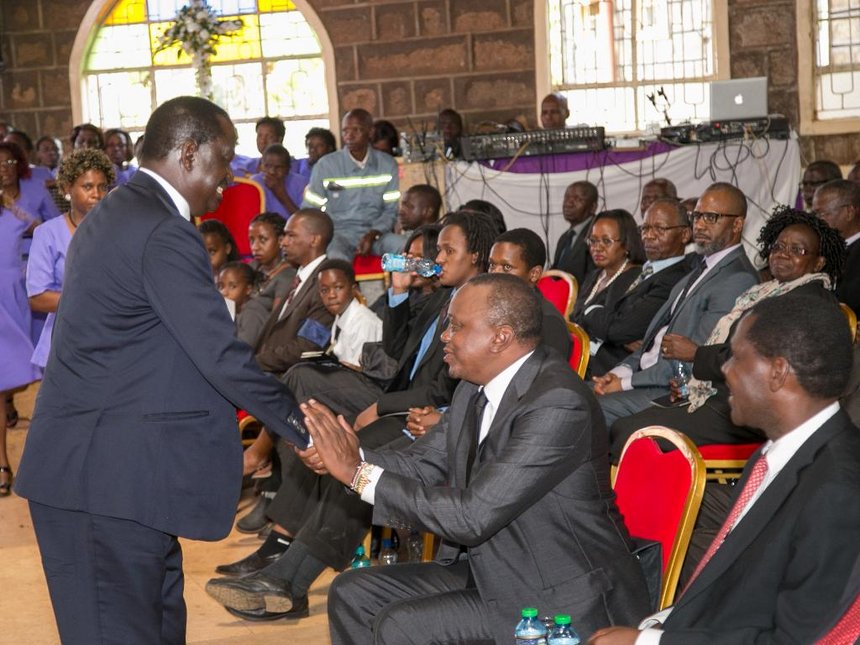 Kenyan President Uhuru Kenyatta and his political nemesis Raila Odinga on Saturday shared a podium at the funeral of the late former  finance minister David Mwiraria at the Ntakira Methodist Church in Meru.

Mwiraria breathed his last at Karen Hospital on Thursday, April 13. He lost the battle to cancer.

But Uhuru and Raila disagreed on Mwiraria’s role in the infamous 2004 Anglo-leasing scandal. During his tenure as finance minister,  Kenya lost Shs 3.3 bn in illion in a scandal involving the awarding of bogus tenders to ghost companies for the supply of printing equipment for new-technology passports.

Tax payers’ money was paid to ghost companies to supply naval ships and forensic laboratories – and Mwiraria’s role in all this was authorizing payments to these non-existent companies.

The case collapsed 11 years later in 2015 due to lack of pinning evidence.

President Uhuru said that Mwiraria should be cleared of all wrong doing.

“Let us all put pressure on the investigative agencies to fully investigate Anglo Leasing, arrest and charge the real culprits,” he said.

He added that it was politics playing out in the accusations against his former minister.

“If people had not played politics, Mwiraria would not have been prosecuted and probably he would be alive today.”

But Raila called for a posthumous probe into the scandal.

“Investigations should be carried out and his name should be cleared posthumously of this demon.”

Raila and Uhuru will likely face off in August in a presidential poll.