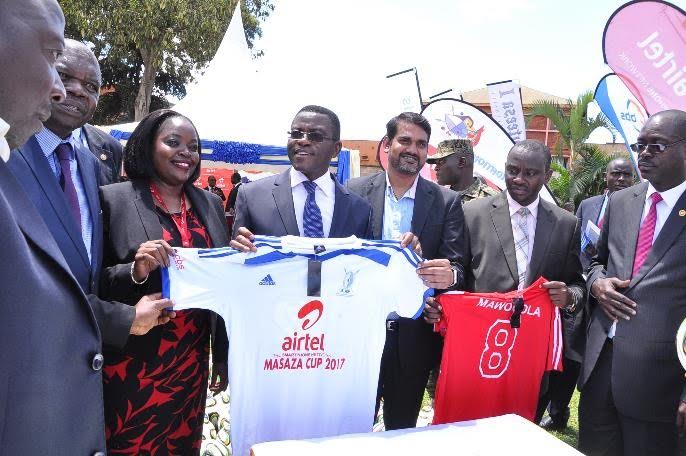 Telecommunications provider Airtel Uganda has Thursday joined the Buganda Kingdom to launch the 2017 Masaza Cup at a press conference held at the Buganda Kindgom offices in Mengo.

The launch event, that comes just a few months after Airtel Uganda signed on as the official sponsor of the tournament, was attended by Airtel Uganda officials led by the Managing Director Mr. Anwar Soussa alongside Buganda kingdom officials who included the Katikkiro Owek. Charles Peter Mayigga, who represented the Kabaka of Buganda, the Sports Minister Owek. Henry Sekabembe and other officials.

The Masaza Cup is an annual tournament that has been played since 2004 and usually features nineteen teams from 19 different Buganda Kingdom regions. Last year, Buddu emerged champion when they beat Gomba to take home the 2016 trophy and prize money.

“It is an honor to add the Masaza Cup – a Kingdom of Buganda legacy tournament that was started very many years ago – to our list of sports sponsorships,” commented Mr. Indrajeet Singh Kumar, the Airtel Uganda Marketing Director.

“Over the years, Airtel Uganda has come out strongly to support the growth of football in Uganda right from the grassroots through our all-inclusive Airtel Rising Stars tournament all the way up to the national football team, the Uganda Cranes.  Masaza Cup fits perfectly in our sports portfolio,” he added.

“We are very fortunate to have a partner that has shown interest and dedication to the development of football in Uganda at all levels,” he said, adding that “…We hold this tournament every year not only to boost the talent amongst the young people from Buganda Region but also to mobilize people living in Buganda to participate in development programmes and activities that boost their income levels.”

He also thanked the media for their continued support over the life of the tournament and encouraged them to continue with the good work.

Over the years, Airtel Uganda has worked with the Buganda Kingdom on a number of projects, the most recent one being the 2017 Kabaka birthday run that attracted over 30,000 participants. Other projects include the Kabaka birthday celebrations, Kabaka Coronation, and Eid-el-Fitri celebrations.

The opening game of Masaza Cup will be played on Saturday 13th May 2017 at Masaka Recreation Grounds.