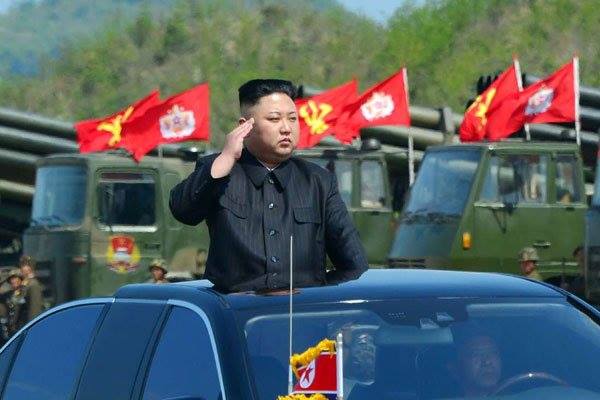 US President Donald Trump called North Korean leader Kim Jong-Un a “madman with nuclear weapons” during a telephone call with Philippine President Rodrigo Duterte, according to a transcript of the conversation released by US media Tuesday.

A White House readout of the April 29 call characterised it as a “very friendly conversation.” Days after the conversation, Trump said publicly that he would be “honoured” to meet with Kim.

But in the call, Trump hinted at a possible dramatic escalation on the Korean Peninsula.

“We can’t let a madman with nuclear weapons let on the loose like that. We have a lot of firepower, more than he has, times 20 — but we don’t want to use it,” the US leader said, citing “two nuclear submarines” the Pentagon sent to the area last month.

Transcribed by the Philippine government, the conversation was released by The Washington Post and The Intercept.

Trump also queried Duterte about whether he believed Kim was “stable or not stable.” The Philippine leader responded that their North Korean counterpart’s “mind is not working and he might just go crazy one moment.”

Kim has a “dangerous toy in his hands that could create so much agony and suffering for all mankind,” he added.

But Trump appeared reassured that North Korea’s recent missile tests had failed, saying that “all his rockets are crashing. That’s the good news.”

Turning to China and its ability to counter the nuclear threat, Trump pressed Duterte to call Chinese President Xi Jinping to exert pressure.

“I hope China solves the problem. They really have the means because a great degree of their stuff come through China,” Trump said, adding: “But if China doesn’t do it, we will do it.”

Duterte agreed, saying “at the end of the day, the last card, the ace, has to be with China.”

However, he also cautioned, starkly, that “the other option is a nuclear blast, which is not good for everybody.”

Trump closed the call by inviting Duterte to visit the White House “anytime you want to come,” and called him a “good man.”

“Seriously, if you want to come over, just let us know. Just take care of yourself, and we will take care of North Korea,” he added.

At the start of the call, Trump congratulated Duterte on doing a “great job” in his controversial drug war that has killed thousands of people.