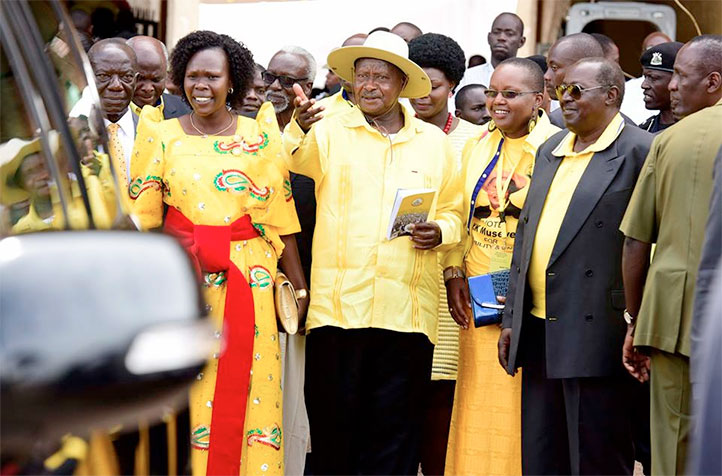 More details continue to emerge from the age limit meeting between Uganda’s three-decade president Yoweri Museveni and the members of his ruling National Resistance Movement (NRM) Central Executive Committee (CEC) that happened at State House Entebbe on Tuesday and Wednesday.

The Tower Post has learnt that CEC members used the meeting to task Museveni, their party chairperson, to meet their needs.

But these would Tuesday evening append their signatures to a resolution drafted by Museveni’s aide, David Mafabi.

With the resolution signed and sealed, the members were tasked with working out a budget for popularizing the controversial Constitutional Amendment Bill 2017 that seeks to, among others, delete the upper age limit in article 102b of the Constitution that bars anyone from standing from president beyond the age of 75.

Members reportedly drew a Shs 8bn budget. It has also emerged that all party organs would be given money to popularize the largely unpopular motion – at least according to the hostility meted out to those marketing it, and an Afrobarometer opinion poll.

They then reportedly asked Museveni for cars and a monthly salary.

The president accepted to meet these demands, sources said.

The cars and monthly stipend, Museveni reportedly emphasized, would be given to members of CEC who are neither in cabinet nor in parliament.

Museveni on Friday held a meeting with the National Executive Council (NEC), the party’s top organ. Like the parliamentary caucus and CEC, NEC is expected to endorse age limit deletion – paving way for a Museveni life presidency.

Inside NRM CEC Meeting:  Matayo Kyaligonza, 2 Others Openly Tell Museveni To Retire In 2021