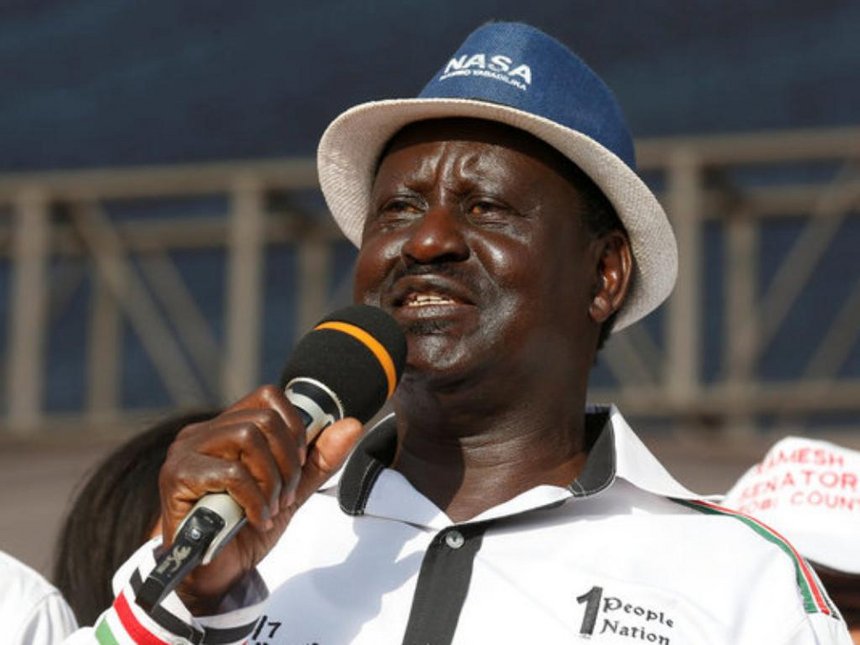 NASA leader Raila Odinga yesterday told off his Jubilee critics for their persistent calls for his retirement from politics, saying he will do so on his own time and terms.

Addressing a a public rally in Nairobi’s Kawangware estate, where he visited to calm NASA supporters after two days of running battles with their Jubilee rivals and the police, Raila said he would remain on the political scene for the foreseeable future.

The opposition chief, who made a fourth stab at becoming President in the August 8 election, which was seen as his ‘last bullet moment’. He said he will not bow to pressure from President Uhuru Kenyatta and Deputy President William Ruto to quit politics.

He went on: “Consider someone’s reasoning and agenda, not the age. I will not retire because Uhuru or Ruto have said. I will retire when I want and after accomplishing my dream. Someone’s agenda is very important and that is why we (NASA) have a proper agenda for Kenya, by getting it out of poverty so that the youth and women get jobs.”

According to the MoU entered by the NASA coalition partners, Kalonzo Musyoka (Wiper), Moses Wetang’ula (Ford Kenya), and Musalia Mudavadi (ANC), Raila was to serve as a one-term President had they won the August 8 General Election.

Uhuru defeated Raila in the August 8 election, but the former Prime Minister moved to the Supreme Court, which nullified Uhuru’s victory and ordered a fresh election, which was conducted last Thursday. Raila stayed out of the race.

The IEBC has yet to declare the final results, but legally it has until Wednesday to do so.

Today Raila is expected to make a major announcement on his next political move.

Last week the opposition chief announced a raft of issues that will partly be part of his political journey ahead, which included turning the opposition outfit NASA into a resistance movement, pushing for a fresh presidential election within 90 days, and boycotting products and services of firms viewed as supportive of the Jubilee regime.

As Kenyans wait for Raila to make the announcement, the question that lingers among his supporters and those of President Uhuru is: What next for Raila and Kalonzo?

Senate Majority Leader Kipchumba Murkomen yesterday said it was in the interest of Raila’s running mate Kalonzo and NASA co-principal Mudavadi that their leader retires from active politics.

“The onlHe twitted that the people interested in Raila’s retirement are Kalonzo and Mudavadi. “William Ruto welcomes the candidature of Rila Odinga,” he said on his Twitter account.

Speaking in Kawangware, Raila warned that the coalition will not allow Jubilee to militarise politics and lead Kenya “with the gun.”

He said President Uhuru has resorted to the “bullet” by deploying heavily armed security officers to NASA strongholds in the election “after being rejected”.

“We must condemn the militarisation of politics in our country. We have continuously seen police officers in combat gear storming our villages shooting aimlessly at our people,” he said.

He added: “Politics must be played by politicians. Politics can’t be played by the gun: The work of police is to stay in police stations and military officers in barracks. You cannot lose trust in the ballot and resort to the bullet.”

The NASA leader also cited last week’s quorum hitch at Supreme Court when it came to ruling on the presidential rerun. Five of the seven judges stayed away. Raila called this “Jubilee’s scheme to reintroduce dictatorship in the country”.

“Jubilee is keen at destroying all institutions to impose dictatorship on Kenyans. We will not allow Idi Amin rule in Kenya,” he said.

Raila slammed the Independent Electoral and Boundaries Commission chaired by Wafula Chebukati, for taking too long to release the fresh presidential election results, unlike the case at the August 8 General Election.

He maintained that voter turnout in Thursday’s repeat poll was 3.5 million, faulting IEBC’s figure of more than 6 million voters who cast the ballot in the election boycotted by NASA supporters.

“Why haven’t they released the presidential results? Uhuru is now competing with the voter turnout and Kenyans have seen through Jubilee’s sideshows. We said that the truth will always prevail, even international observers have also witnessed,” Raila said.

The voter turnout in the August election was over 14 million out of 19.6 million registered voters.

However, the IEBC took three days to declare Uhuru the winner but the Supreme Court nullified his reelection, citing illegalities and irregularities in transmitting results electronically.

This time the commission has held that it will only announce the winner after verifying all the physical results from the 290 constituencies.

However, the commission yesterday remained mum over the fate of the four counties in Nyanza where the election failed to take place.

The polls were rescheduled for Saturday, but this was once again postponed.

The commissioners were held up with the verification of constituency results. By 7pm yesterday, it had received results from 256 constituencies.

The commission was optimistic of concluding the verification exercise by 8pm last evening, and, according to IEBC sources, the commissioners would then retreat to deliberate and decide whether to announce the results without conducting the election in the four counties.

“If the commissioners agree to declare the results then we expect to have the announcement tomorrow [today] and in case they agree to have the polls, then they must be held on Tuesday, ahead of the seven-day deadline for results declaration,” a senior IEBC official told the Star.

By the time we went to press yesterday, President Uhuru had 7,160,140 votes from the 244 constituencies verified out of the 256 that had been received.