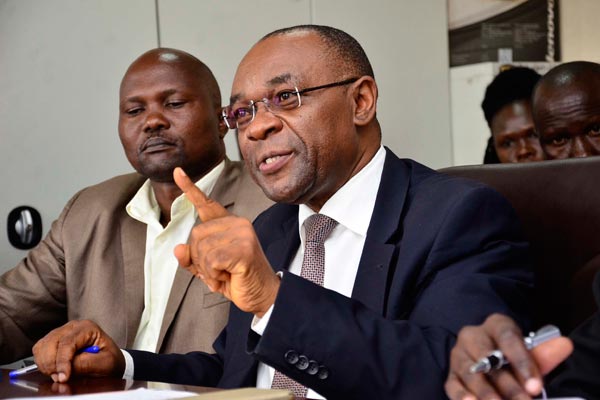 Igara West MP Raphael Magyezi has failed to present his views in the first public hearing of the emotive Constitutional Amendment Bill after opposition MPs heckled him.

Popularly referred to as the Age Limit Bill, the proposed amendment seeks to delete the upper age limit in article 102b to allow three-decade president Yoweri Museveni stand for reelection beyond the age of 75.

Chaired by Budama West MP Jacob Oboth-Oboth, the meeting of MPs on the  the committee of legal and parliamentary affairs  saw exchange between the chairperson and opposition whip Ssemujju Nganda over the former’s impartiality since he had reportedly met Museveni in a caucus of the president’s ruling National Resistance Movement (NRM) party MPs.

Magyezi was forced to take oath, which he did.

But the opposition MPs on the committee did not allow him to make his presentation because of continuous heckling.

Kumi Woman MP Monicah Amoding even went as far as forcefully switching off Magyezi’s microphone to block him.

Amoding wanted Oboth-Oboth to respond to Ssemujju’s question on the process the bill had to undergo.

“There is a process that a Bill should take before it tabled. Can we conclude that the Bill is legally before us?” Ssemujju had earlier tasked Oboth-Oboth to clarify.

With the hostility increasing, Magyezi and some NRM MPs stormed out of the meeting.

Outside, the visibly angry Magyezi told reporters: “I am ready to defend my bill; I don’t want their administrative issues to interfere with my bill. I want them to sort themselves out. As the mover, I have concerns, this bill has been with the committee for 28 days and if within these days they can’t sort out their administrative issues, we are talking about accountability and value for money.”