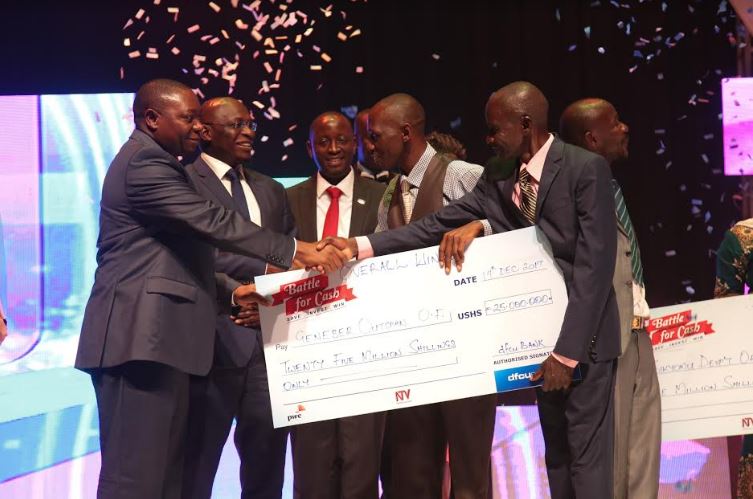 Dfcu Bank, in partnership with NTV Uganda and Price Waterhouse Coopers (PwC) have concluded a nationwide campaign targeted at driving a savings and investment culture in Uganda. The campaign, which has been running over the last three months, was a TV show competition dubbed ‘Battle for Cash’.

Between June and August, dfcu Bank had teams going round the country carrying out regional saving and financial literacy workshops. Some of the topics covered included; Why and how to save; where to invest money so it can grow, things to think about when thinking of investing and so much more. This was aimed at changing the perceptions and attitudes about money, savings and investments.

dfcu Bank received applications from close to 200 Investment clubs across the country. The applications were independently vetted by PwC who were able to zero down to 20 clubs that entered the TV competition.

The Battle for Cash challenge has been running on NTV every Thursday at 8:00pm. As part of the application process, clubs were tasked to develop a Business plan for an innovative investment project. So at the start of the show all shortlisted 20 clubs had to defend the business plan they wrote to a panel of judges to make it to the next show. The clubs were trained in different aspects and assigned weekly tasks to demonstrate their ability to put into practice what they had been taught.

“We are grateful to dfcu Bank for championing this cause as part of financial literacy in Uganda. An enlightened community will always invest wisely so we encourage all able men and women should come together and form savings clubs to guarantee their future,” said Ag. Managing Director, NTV Uganda Johnson Omolo.

Geneber Outspan Organic Farmers who are the overall winners walked away with UGX 25 million and coming in second, The Peak Investment Club won UGX 15 Million. The third winner Sikyomu Development Organisation got UGX 10 Million while the fourth and fifth clubs both got UGX 5 Million each.

In recognition of the role of women and youth in development there was a special category for women and youth. The best youth club price was scooped by Plus Save Group and Soroti Women Cooperative Union were awarded in the best women club category. Both clubs walked away with UGX 7.5 Million each.

Speaking during the Battle for Cash grand finale and awards gala, the dfcu Bank Executive Director and Chief of Business William Sekabembe said; “In terms of changing culture, you will appreciate that it takes some time. What we have seen though, over the last six (6) months, is growth in the number of investment clubs opened with dfcu Bank across the country. Even more important we have seen several Clubs reorganizing themselves and becoming more focused in terms of developing ideas for investment.”

dfcu Bank introduced the Investment Clubs program in 2007 providing a conducive platform to foster group savings. The dfcu Bank program has since grown with over 10,000 Investment Clubs that cut across all segments including students, the professionals, women and youth holding a savings turnover in hundreds of billions of shillings.

“It is not enough to simply save money if it is not growing so the Investment Club challenge was also about challenging the investments clubs and the public to think through how to grow & multiply their savings,” Sekabembe added.

“We have had a lot of learning from specialists in different areas of business. The exposure that we have got has been very important and it has helped improve the running of our businesses. It has been a great opportunity to get ideas on how to handle different business challenges.” Said Geneber Outspan Organic Farmers the winner of the Battle for Cash finale.

Speaking at the event, PwC Country Assurance Manager, Uthman Mayanja said PwC was proud to be part of this initiative supporting transformational ideas. “Our role in this initiative is to facilitate and support the different teams, and transform them from simple savings’ clubs to sophisticated investment clubs,” he added.

According to the Ambassador of France to Uganda, Stephanie Rivoal, chief guest at the grand finale and awards gala, Uganda’s young population presents an incredible opportunity to spur growth and achieve Vision 2040 of a transformed, modern and prosperous country. “Government together with the private sector can make this dream a reality through policies and ventures that favour entrepreneurship, innovation, sustainable investments and a savings culture among the population. dfcu Bank’s Investments Clubs initiative deserves an applause.” she added.

During the Battle for Cash challenge, emphasis was put on two special groups of women and youth. Clubs with 100% composition of these special groups applied to enter the competition and were added into a special category for Women and Youth clubs, increasing their chances of winning. This was in belief that these two categories play a major role in the development of communities and Uganda as a whole.

An amount totaling to UGX 100 million in prize money was set aside for the Investment Club challenge including regional draws carried out in different parts of the country. Additionally, one delegate from each of the 20 selected clubs that entered the competition is to be sponsored to attend a study tour in Nairobi in January 2018. This as the top seven (7) clubs will receive free advisory services for a period of one (1) year courtesy of PwC.