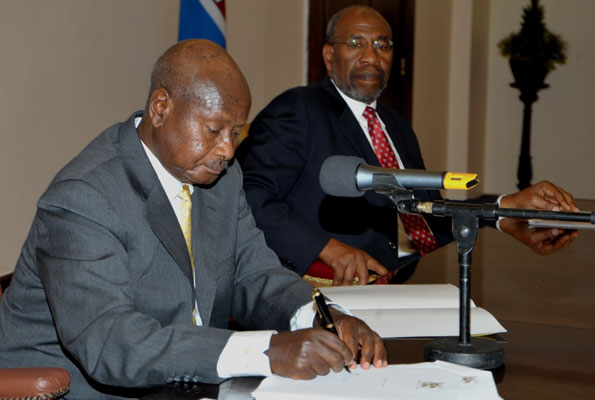 News reaching us indicates that President Yoweri Museveni has signed the Age Limit Bill into law.

Museveni according to Parliament’s Director of Communications and Public Affairs Chris Obore, signed the bill on December 27, 2017.

“Yes, he just signed it. It is now an Act of Parliament,” Chris Obore confirmed.

The bill which was moved by Igara West MP Raphael Magyezi, deletes the age limit in article 102b of the constitution allowing anyone to stand for president beyond the age of 75.

Born in 1944 and in power since 1986, President Museveni will be over 75 and therefore would have been ineligible for reelection when Uganda next goes to the polls in 2021.

With the bill signed into law, President Museveni is free to run for another term in office.

Last month 317 MPs voted in favour of the motion to lift the age and only 97 members voted against. Two legislators declined to vote.

The constitutional amendment comes after religious leaders, political commentators and civil society organizations had warned President Museveni against signing the age limit bill into law, arguing that it was against the will of majority Ugandans.