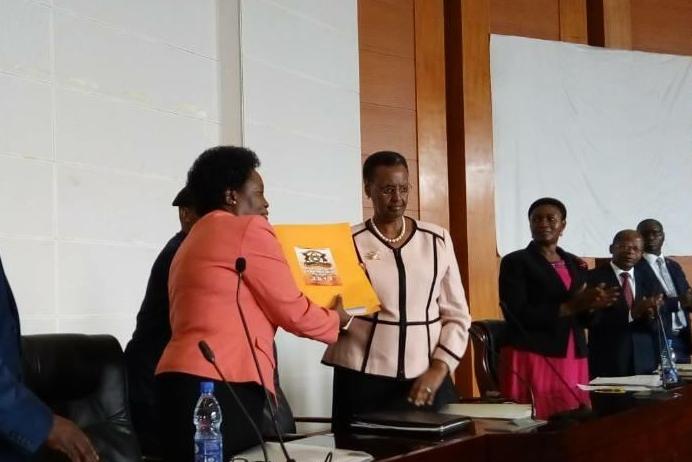 UNEB Chairman Prof. Mary Okwakol, who handed over the results to First Lady and Minister for Education and Sports Janet Museveni at the Office of the Prime Minister, noted that there has been improvement in performance and more candidates will be able to join post primary institutions as compared to last year.

Social Studies was the best performed subject, while Mathematics was the least done in grading performance.

The results also indicate that well as more girls registered and sat the exams, the boys performed better.

Results of 2559 candidates were withheld pending investigations of malpractices.

Minister for Education and Sports Janet Museveni condemned the acts of exam malpractice and expressed disappointment in the teachers that encourage the vice.

“I take serious note to condemn exams malpractice. It’s unfortunate that the people who are supposed to be against this vice, are the ones helping the pupils.”

In order to increase the number of candidates registering for PLE, Government has banned pre-registration tests in primary schools, Education minister Janet Museveni said after being handed the 2017 PLE results.

“I’m pleased once again to release the results of PLE 2017. We must continue to invest in all our energies to ensure that all boys and girls continue to attend and finish school,” Janet Museveni said.

“There should be no pre-tests for children to ensure the increase of registration of candidates,” sheadded.