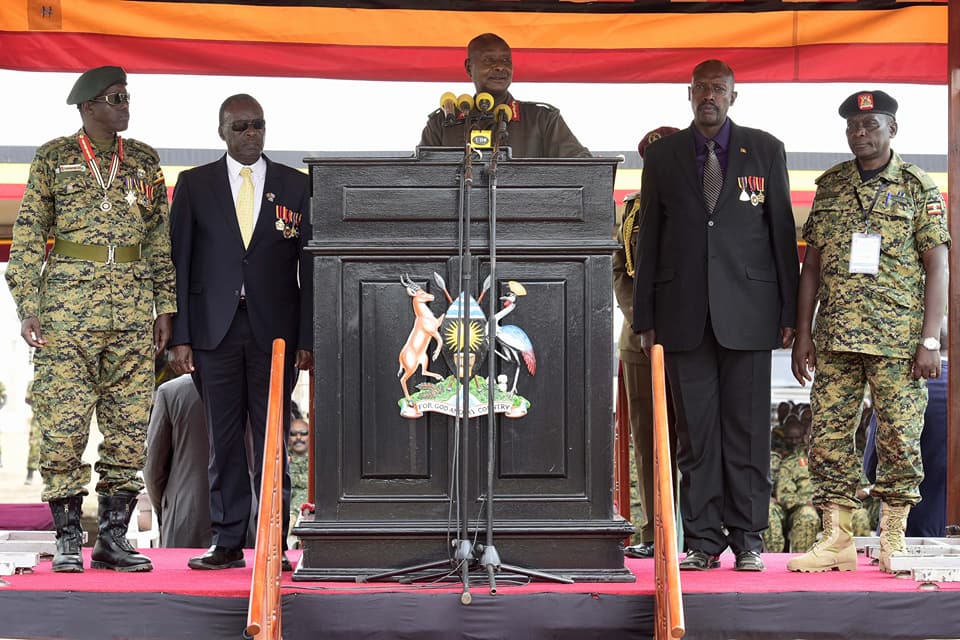 President Yoweri Museveni has said that nobody can disrupt the peace Ugandans enjoy today because of the strong force Uganda People’s Defence Forces (UPDF) has become.

Museveni was speaking during the Terehe Sita celebrations in Butaleja District on Tuesday (February 6th, 2018)

The president said Uganda is greatly indebted to Mwalimu Julius Nyerere and FRELIMO leader Samora Machel for their support to the liberation struggle right from the 70s.

“This logistical support, training and ideological grounding is what laid a firm foundation for the development of the Uganda Peoples Defence Forces (UPDF),” Museveni said.

“The Kabamba attack was not the first attempt to liberate Uganda. We had tried in the 1970s with the help of Nyerere and Machel. This strong force (UPDF) would not be in place if we did not have their support and Ugandans should never forget the solidarity of the people of Tanzania and Mozambique,” he added.

Museveni noted that Ugandans ought to know that they have peace and nobody can disrupt it.

“We defended the peace of Uganda when we were much weaker; there is nobody who can interfere with our peace today.”

He thanked the people of Butaleja and the wider Bukedi for supporting and voting massively for the National Resistance Movement, which he says has “energized the struggle and makes each of you a freedom fighter”.

“I also salute the East African Community for finding it fitting to work together as a regional force to defend and protect the region. This is the only way we can guarantee the region’s strategic security and safety, independence and sovereignty. The African continent was colonized because it was not united. It is therefore important that we work to unite the continent in all aspects. In Rwanda last year, African leaders passed a resolution to create a Continental Free Trade Area and that is the way to go,” he noted.

He urged the public differentiate between development and wealth.

“Even if the government develops all infrastructure but the population does not utilize it to make wealth, progress will not happen,” he noted.

This year’s Terehe Sita celebrations ran under the theme; “Re-affirming the contribution of armed forces towards regional integration for strategic security, development and prosperity”.

The celebrations were also graced by representatives of other armies of the EAC countries.