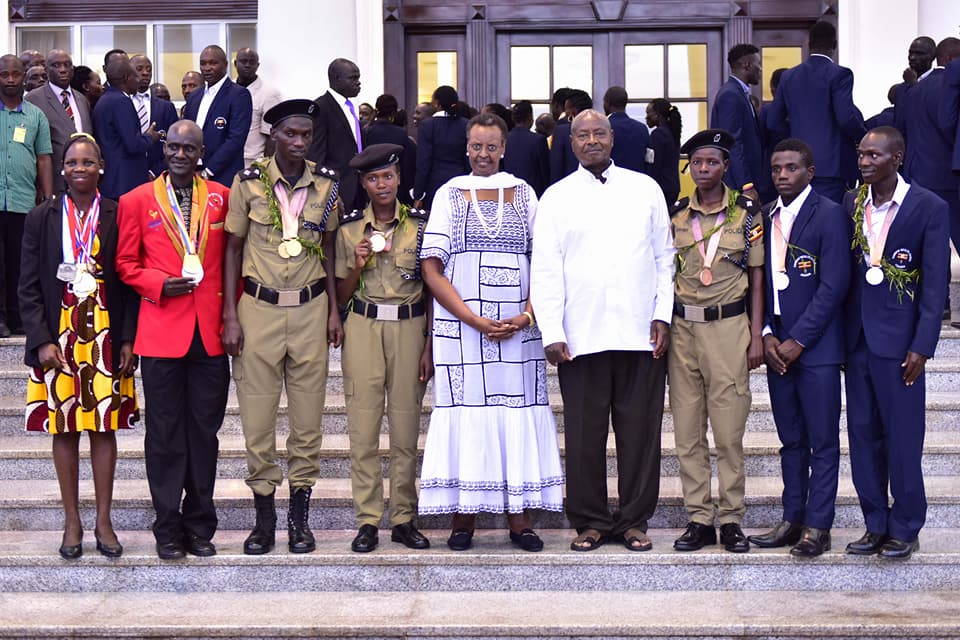 President Yoweri Museveni has said government will pay monthly salaries to the medalists at the just concluded Commonwealth games and build houses for those that won gold.

The president was speaking at a luncheon he hosted together with the Minister of Education and Sports, Mrs. Janet Museveni, at State House, Entebbe on Sunday for the Ugandan contingent that returned last Thursday from the recently concluded Commonwealth Games in Gold Coast-Australia.

The luncheon was hosted in recognition of the team’s exemplary performance where they scooped 6 medals.

Uganda was ranked 15thfollowing Kenya that was ranked 14thout of 71 countries that took part in the games and only 43 countries were in the medal bracket. This was one of Uganda’s best performance having done very well again in 1970 at the Edinburg Commonwealth Games in the United Kingdom where the country got 3 gold, 3 Silver and one bronze medals.

President Museveni who was addressing a delegation of over 300 district officials from Kapchorwa, Kween and Bukwo, that accompanied the families and parents of the medalists, congratulated the athletes for making Uganda proud by winning 6 medals.

“I want to thank the 6 young people who got the medals for themselves and the country. I made a promise that whoever wins a gold medal at an international or continental competition would get a monthly salary of Shs5 million, a silver Shs3 million and Shs1 million for bronze. The five medalists today will get onto the payroll. I have also been told of some arrears to other athletes, they will be cleared,” Museveni said.

“Likewise, I will build a house for Cheptegei and Chesang who won gold medals, like I have done for previous gold medalists,” he added.

He urged officials from the Ministry responsible for sports to vigorously scout potential and talent among young Ugandans now that the country is peaceful. He explained that Uganda was able to put up its best performance and win more medals in 1970 in the Commonwealth Games in Edinburgh because there was relative peace but that marked the end of sports in Uganda as political chaos ensued in 1971.

“Insecurity affects sports. For sports to flourish, you need peace,” he stressed.

“Uganda is very lucky because it has multiple heritages – that of our people, our land in Elgon which is 4,000 metres high. In Sabiny, we have a heritage from God,” adding that after heritage the next move is the potential followed by health and proper nutrition.

‘The children must be well fed for them to have enough energy, like in football you need a lot of energy to strike a powerful kick.,” The President also added that discipline is paramount to athletes not to squander their lives with alcohol and immorality.

On facilitation for sports, President Museveni advised sports strategists to prioritize areas where the potential is very clear like in athletics, with emphasis on games like swimming where athletes can possibly be attached to oversees embassies where they can train better.

He also reiterated his counsel to spot talent and attach them to government institutions like the Police, Prisons, the Army or Wild Life Authority where there is a base like accommodation and salaries among other provisions.

Commenting on the tax waiver for sports equipment, he challenged sports officials, especially retired sports persons, to have equipment made in Uganda as opposed to their importation from abroad. He pledged to complete the high-altitude training centre at Teriet in Kapchorwa districtin Eastern Uganda.

The Minister for Education and Sports, Mrs. Janet Museveni, thanked God for enabling the team to perform very well in the games.

“I am thanking God. I think He is the one who led you to bring all the medals to the country. It is a beautiful gift to the country,” she said.

She also thanked all stakeholders in the area of facilitating and supporting the team, especially President Museveni, adding that the facilitation will go a long way in fostering sports in Uganda.

State Minister for Sports, James Bakabulindi, thanked President Museveni for investing properly on the team as they did Uganda proud by bringing back home 6 medals.

Hon. Steven Chebrot, who spoke on behalf of the Sabiny, reported that the people in Sebei sub-region are now more united than ever especially in the promotion of sports.

The leader of the Ugandan team to Australia, Ms. Beatrice Ayikoru, who is also the Vice President of the Uganda Olympic Committee, said the team was not only disciplined but put up a brave fight for the medals.

The Gold medallists Joshua Cheptegei and Stella Chesang both now serving in the Uganda Police Force expressed their delight for the win and thanked President Museveni and Mrs. Janet Museveni for their support.

Parliament will on Tuesday move a motion to honour the Ugandan medallists from the Commonwealth games in Australia.