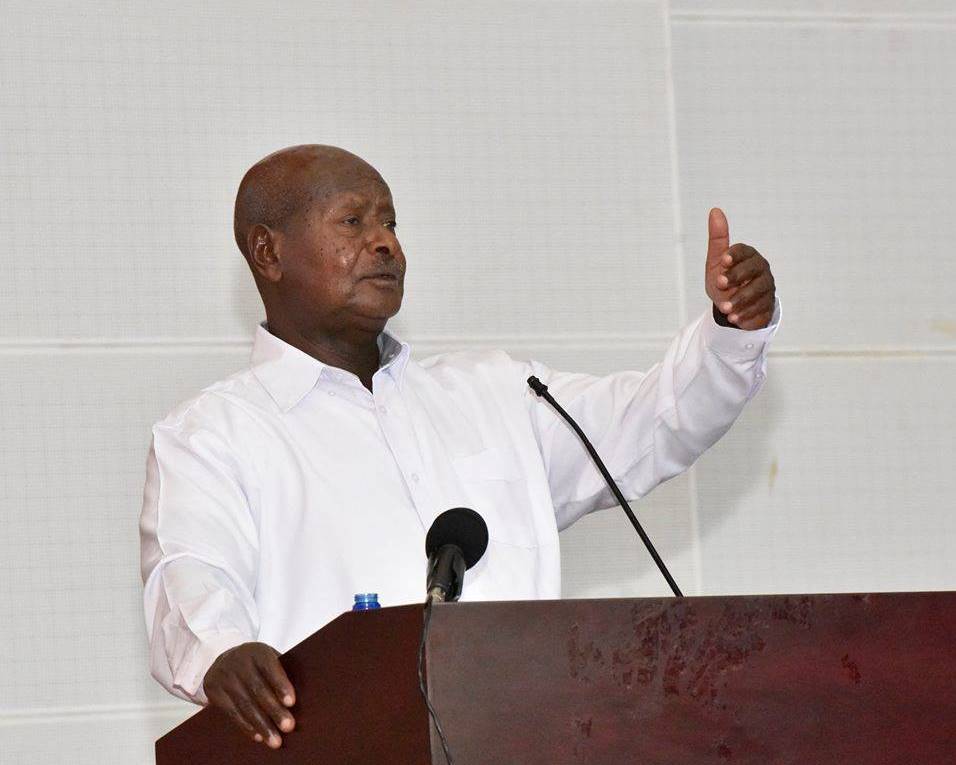 President Yoweri Museveni has spoken out on the much criticized Social Media and Mobile Money taxes that took effect on 1st July 2018.

Below is his statement, which was shared on his official Facebook page;

Greetings. I am using social media to share with you the reasons for the social-media tax and the mobile money tax.

Our budget for this financial year is Ug.Sh 32 trillion. The taxes collected from within Uganda and the other fees for this financial year will be Ug.sh.17.5 trillion. The balance (the difference) is handled by borrowing from outside the country, Ug.Sh 8.3 trillion, as well as borrowing from within the country, Sh 7 trillion. We, then, also get grants from outside to the tune of Sh280bn i.e 0.28 trillions.

Why do we have to borrow or beg from outside or even borrow from within? We do so because many people who are supposed to pay tax do not pay the tax. How do we know this? We know this by using the standard measurement used all over the World. This is the GDP: tax ratio. This means the amount of taxes paid compared to the size of the GDP, the size of the economy.

(a) telephone companies have been under-declaring calls until recently when we acquired machines to see the telephone calls ourselves. Big shame to the culprits;
(b) Many of the people who should be paying taxes of incomes from rent do not pay or underpay;
(c) Many citizens are still in subsistence agriculture (okukolera olubuto kyokka, Itiyo pi ikeni ) and informal sector (juakali) and I always oppose taxes on those sectors (gonja roasters, mchomo sellers, mechanics, carpenters etc); in any case, it is difficult to know how much they earn;
(d) Absence of scanners on the borders allows false declarations of goods in containers. The URA now has 4 scanners only. I have directed them to buy enough scanners to cover all entry points by land, water and air; and
(e) Slowness in introducing electronic stamps to the goods imported from outside at the factory level.

We, therefore, end up getting revenue from consumer taxes on mainly luxuries; income tax; profit tax; and import tax on consumables minus the production inputs only. That is why we end up with the low GDP: tax ratio of only 14.2% and have to borrow or beg, yet our economy is growing.

Let us answer the last question first. Those dollars are earned by us who produce coffee, tea, the milk products, by our gold, by our tourism, by our processed fish , by our manufactured goods (e.g cement, textiles, soap, mattresses, cooking oil, etc).

Therefore, some of us, myself included, either earn the dollars or save the dollars by producing products instead of importing them, but some of our countrymen donate those dollars back to the foreigners by chatting endlessly on the social media. Is this correct or fair? Is it good for our country?

Mobile money transfer, on the other hand, is a useful service. Since the informal sector (juakali, mchomo selling etc) is never taxed and I am always against those direct taxes on those sectors, is it too much for users of the mobile money senders and receivers to also make a modest contribution to the development of their country? The 1% was a miscommunication. The actual figure was 0.5%, half of one percent. That is what we should debate, on the mobile money.

As to social- media tax, all the moral reasons are in favour of that tax. The social – media users have no right to squander the dollars I earn from my coffee , my milk etc by endlessly donating money to foreign telephone companies through chatting or even lying and, then, they are allergic to even a modest contribution to their country whose collective wealth they are misusing.

The same with those who engage in games betting. They bet in local shillings. Since, however, our economy is an open one, the foreign owners of betting machines rush to the forex bureaus, buy dollars, the ones I earned , so as to externalize them. This is what affects our shilling.

The importers of foreign luxury goods- wines, whiskies, artificial hair, furniture, textiles, shoes etc, goods that can be made here, also squander our dollars. Fortunately, on account of our campaigns, the import bill has decreased from US$ 7 billion to US$ 5 billion. That is not enough, however.

This is to clarify that there is no tax on mere depositing of money on a mobile phone account. That confusion should be clarified. The half -percent tax, not 1 percent, is only on the sender and the receiver of money through mobile money. Discuss this.

I congratulate our Science team for demonstrating that we now have the eyes to see all the goings on in the telecommunication and financial services. No more games.

This capacity will be extended to deal with the criminal pigs that have made it a hobby to kill Ugandans. They will pay. I am, however, interested in a rational and honest dialogue, especially on the half -percent tax on mobile money sending and receiving.