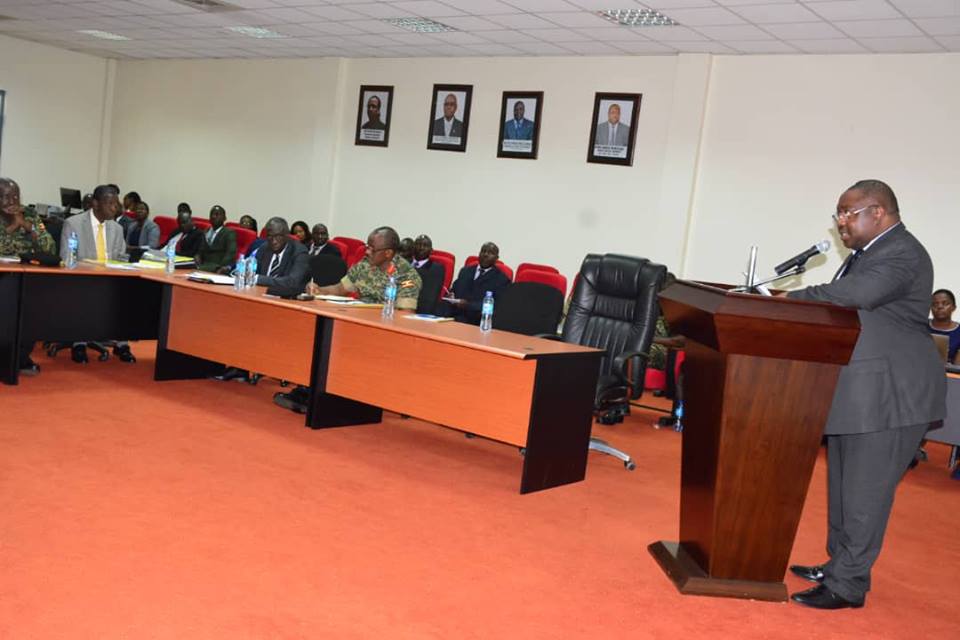 The Minister of Defence and Veteran Affairs Hon. Adolf Mwesige has urged Government Ministries,Departments and Agencies (MDAs) to cooperate on matters of national security, sustainable development, disaster response and management.

Hon Mwesige said this on Tuesday (28 August 2018) while officiating at the opening of the Annual Security Sector Performance Review workshop to review the performance of the security sector for the Financial Year (FY) 2017/18 at the Ministry Headquarters in Mbuya, Kampala.

He lauded MDAs that cooperate with the security sector to ensure that security prevails throughout the country for economic growth and development.
“It is cardinal for MDAs to work together for the benefit of all Ugandans. Working together and appraising whatever has been accomplished in the Financial Year (FY) 2017/18 minimizes threats faced which threats require a wide range of security actors,” he said, adding that an agency succeeds only if it works with others.

The Defence Minister further called for the creation of synergies where Ugandans can freely conduct economic activities geared at growth and economic development of the country.
However, Hon Mwesige implored participants to deeply discuss the issue of minimizing resources to avoid duplication and wastage.

In his remarks, the Chairman of the workshop and Minister of State for Defence in Charge of General Duties Hon Charles Okello Engola commended participants for leading the country into an admirable direction despite the challenges. He encouraged members in the security sector to often embrace the idea of team work whenever executing any task.

The Minister of Security Gen Elly Tumwine in a speech read by Hon Charles Okello Engola noted that reviewing and reflecting on priorities of FY 2017/18 is a commendable effort towards ensuring peace and stability.

He observed that threats like extremists and Allied Democratic Front (ADF) rebels, politically motivated crimes, negative foreign influence, organized crime, and food insecurity; among other threats continue to derail the stability of Uganda and require planned prioritization of activities to address them.

Gen Tumwine further called for practical solutions from the workshop that will enhance the security sector to deliver on the wider deliberations of the Government.

During their submissions, the Director General of Internal Security Organization (ISO) Col Kaka Bagyenda, the Director of the External Security Organization (ESO) Ambassador Joseph Ocwet and the Ministry of Defence and Veteran Affairs Permanent Secretary Mrs. Rosette Byengoma, all submitted that peace, security and tranquility are being manifested across the country amidst the budget constraints, inadequate infrastructure and training gaps that hinder the optimal performance of the security sector.

The Annual Security Sector Performance Review workshop aims at identifying budget priorities, achievements, challenges faced by the security sector in fulfilling its mandate for the FY 2017/18 and further makes recommendations that can be adopted for the success of security operations in the forthcoming Financial Year.

Participants at the workshop included UPDF Chiefs and Directors, Members of Parliament, MODVA/UPDF Undersecretary in Charge of Finance and Administration Mrs Edith Buturo, UPDAF Undersecretary In charge of Finance James Mutabazi, Representatives from the Office of the Prime Minister, Ministry of Finance Planning and Economic Development, National Planning Authority, and Commissioners, among others.