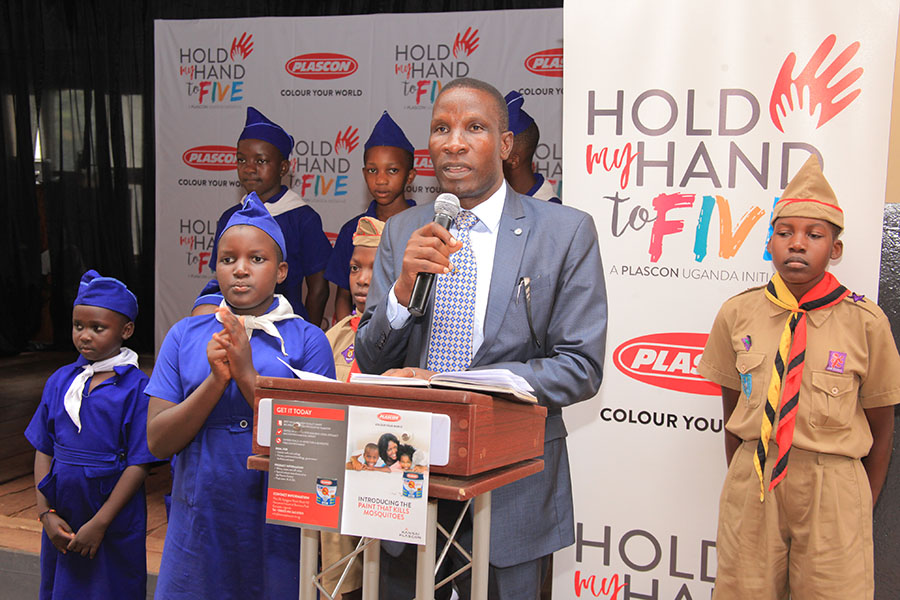 Paint Kansai Plascon has launched its largest humanitarian project dubbed “Hold my hand to 5” which is aimed at fighting the prevalence of malaria cases across the country.

The paint maker which launched the first Anti Mosquito Paint product in the market powered by Kansai’s Knock down technology has embarked on painting schools across the country with the new paint which disrupts the Mosquitoes nervous system and affecting it desire to feed.

Speaking about the new paint product during the launch of the “Hold my hand to 5”  Corporate Social Responsibility (CSR) drive at Nakasero Primary School, Mr. Chris Nugent, the managing director Kansai Plascon said the Plascon Anti-Mosquito Paint is premium quality acrylic emulsion paint for interior use that is designed to kill mosquitoes which land on painted surfaces.

“70% of malaria deaths involve children under the age of five, making malaria prevention an urgent need in Africa. As part of the “Hold my hand to 5” initiative, Plascon will donate Anti-Mosquito paint to underprivileged schools across the country. By partnering with government, NGOs and the private sector, the ““Help me get to 5” campaign will have a bigger, more enduring impact,” Mr. Chris Nugent said.

Statistics released by Malaria No More, an organization dedicated to eradicating the disease show that a 10% decrease in malaria has been associated with a 3% rise in GDP. Reducing Malaria will keep children in school, allow parents to work, and reduce spending on medication and healthcare. Malaria No More also reports that the disease is the biggest killer of children below the age of five.

“Kansai Plascon’s Anti-Mosquito paint is the only product of its kind. It has been approved by all the local bodies necessary including; the Ministry of Health, Ministry of Internal Affairs the National Drug Authority, National Environment Management Authority, and National Health Research Authority. It is lead-free, a low emission product that can be used anywhere, which makes it the ideal way to put people at ease if they are living in or visiting a high-risk malaria area,” said Kansai Plascon Vice President Dr Kalpana Abe.

The ‘Knock Down’ technology works by disrupting the mosquito’s nervous system on contact , reducing its ability to remain on painted walls or flying too far away, resulting in it being knocked down. The knock-down effect lasts for up to two years, offering lasting protection from malaria infection and other mosquito-borne diseases,” added Dr Abe.

The paint has a smooth, matt finish with superior opacity and will continue to kill mosquitoes that carry the malaria virus for up to 24 months.

“The “Hold my Hand to 5” campaign aims to highlight the plight of the most vulnerable malaria victims: our children, while driving consumer education on the fight against malaria. Kansai Plascon plans to forge strong partnerships with government, NGOs and the private sector to ensure the campaign has an enduring and holistic impact,” said Regional Brand Manager Lungi Koni.