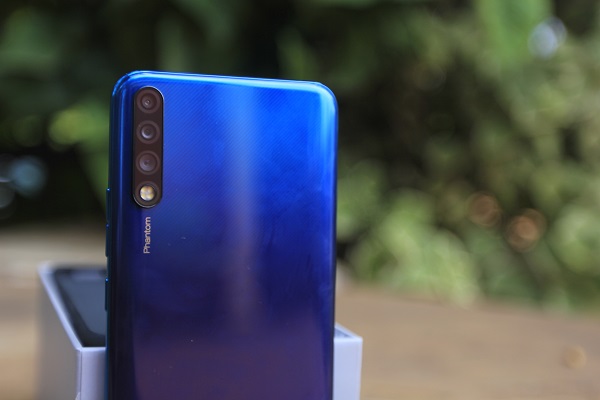 For the past two weeks, I have been using the recently launched Tecno Phantom 9, the latest device in the Tecno Phantom smartphone series.

The phone was launched in mid-July with a proposition of extra developed features as compared to its predecessor which was launched nearly two years back.

Among the notable features is the AI triple camera, in-display finger print sensor and the improved Amoled display.

You can’t start to talk about the Tecno Phantom 9 and forget the Amoled display which makes everything appear more saturated and clearer.

The display is bright outdoors and can get dim in its lowest settings which makes it good for reading without having to strain your eyes.

This feature can be activated from the quick settings by tapping the ‘Eye Care’ function.

Generally, the device’s screen is very responsive to typing and has better viewing angles as compared to the predecessor and the other devices in its price range.

The Phantom 9 has a really big screen with full HD+ display with a resolution of 1080×2340 which makes it ideal for mobile gamers and those who prefer to consume their media primarily on mobile phones.

In the settings, you will see that it comes with 6GB RAM and 128 GB storage space. You have around 116 available to use but this varies among different devices.

Going to its quick settings, you will get all the familiar utility tools.

What stands out is the Eye Care feature which is good for reading both in low and high concentration of light while saving battery. The Eye Care function does pretty much the same function as the ‘Read mode’ feature since both reduce light.

About performance, the processor in the Tecno Phantom 9 is the Hellio P35 Octa core CPU with a processing speed of 2.3GHz.

Complimented by the high RAM of 6GB, the Phantom 9 is expected to have a very high speed in reaction and processing but, I realized there is no big difference in the speed of reaction from the Tecno Camon 11 and the Spark 3 Pro.

The Spark 3 has a RAM of 2GB and processing speed of 2.0GHz while the Camon 11 has RAM of 4GB and a processor speed of 2GHz.

One outstanding feature that I can’t forget to mention is the indisplay fingerprint sensor which is the first of its kind in any Tecno device.

The same feature can be found in the latest Samsung phones, Xiaomi, Vivo, Huawei although not in many types.

The feature appearing in the Phantom 9 is a sign that Tecno is not done taking on the big guns in the smartphone industry and a promise that they are not done innovating.

The Indisplay fingerprint is easy to setup and it takes two steps to unlock your phone. When you pick up the phone, it displays the fingerprint scanner.

The scanner is sensitive to shake but when it doesn’t, you will either need to give it a first tap on the screen or press the power button on the right.

The device also has a facial unlock which is very fast – I can actually say annoyingly too fast.

Although face unlock might seem safe, I wouldn’t advise my friend to use it. The reasons for the same are better not mentioned in this article.

The Phantom 9 doesn’t come with a fast charger but takes about 2 hours to get to full charge using a third party fast charger.

On full charge, I got through a full day of using social media, making calls, the camera and a bit of other media.

If you are a light user, the device battery might last up to 72 hours but that was very unlikely with a user such as yours truly.

There are four of them; three at the back and one on the front.

Tecno couldn’t skip the urge to include a triple camera which we recently saw come up in Infinix. Still in the Tecno Phantom 9, it is a welcome addition.

Tecno approached the triple camera more similary to the way the Infinix Note 6 did, with a 16MP primary camera, an 8MP camera for depth sensing and a 2MP ultra wide lens with a quad flash at the back.

The selfie camera that is housed in the waterdrop notch is 32MP.

The camera app has several shooting modes. One of them is Refocus that focuses on a subject and blurs the background.

I wouldn’t call myself a good photographer or a camera expert, but I will tell you the photos taken by the Phantom 9 are rich in fine detail.

While noise can be spotted in tricky setups, especially in low light, colours are nicely balanced.

However, this is not the case when the rear camera is used especially in portrait mode. Edges are inaccurately cut, and blurring is done wrong in some occasions.

Indoors, pictures taken using the selfie camera will appear brighter than the ones taken by the Primary Camera but in total darkness, the quad flash at the back will bring splendor to the images.

The Tecno Phantom 9 records videos in 1080Pi for both the front and rear cameras.

The Phantom 9 has lots of storage at 128GB and as of writing this review, I haven’t filled even a quarter of it.

Music playback is fair, but I have heard better quality from competitors. The Infinix Note 6 has way better sound output supported by the newly included Dirac Technology. On the bright side, the included earphones are awesome.

The device lacks some form of Ingress Protection, so do not put it under water.

Camera performance is great for the price.

Day to day performance is admirable.

The Tecno Phantom 9 is on sale countrywide at a retail price of 919,000 in all Tecno branded shops.

Have you used the Tecno Phantom 9 yet, please do tell me your experience via my Twitter handle or in the comments box below.