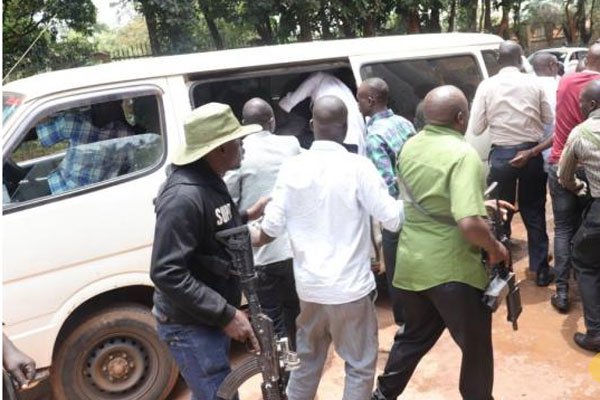 Four of the eight suspects in the murder of former Police Spokesperson AIGP Andrew Felix Kaweesi were on Wednesday rearrested outside the International Crimes Division of the High Court in Kololo, Kampala after being granted bail.

The four suspects; Yusuf Nyanzi, Jibril Kalyango, Joshua Kyambadde and Yusuf Mugerwa were released on bail by Justice Lydia Mugambe of the High Court before being arrested by plain clothed security operatives that were waiting outside.

The security operatives blocked the two cars in which the suspects were moving as they tried to exit the court premises and forcefully dragged them out before driving them away in a white Toyota Hiance van Reg No. UAF 257E.

Earlier, the other four suspects; Aramaathan Noordin Higenyi, Bruhan Balyejusa, Abdu Rashid Mbazira and Shafiq Kasujja had been returned to Luzira Prisons over the pending charges they had at Nabweru and Mukono Magistrate courts.

AIGP Kaweesi, his driver Wambewo and body guard, Kenneth Erau were gunned down by unknown assailants in Kulambiro, Kampala in March t2017.