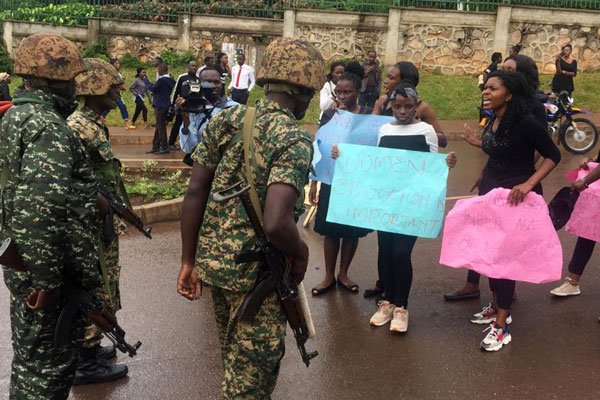 Government through the Presidential Adviser on Military matters Gen. Salim Saleh has paid Shs. 21 million to 21 Makerere University students whose property was destroyed as military officials wreaked havoc on students during the previously ended strike.

The strike which lasted over a week was characterized by violence orchestrated by Police and military officials against students who were demonstrating against tuition increment.

According to reports, a number of students were battered by military men who had set camp at the University while other students lost property as army men broke into their rooms.

The actions of the security officials received a lot of criticism from rights bodies and a number of other government entities leading to the arrest of Capt. Richard Lubeere, the officer who commanded the raids on University halls and hostels.

This website has learnt that Gen. Saleh met Makerere student leaders in Kapeeka on November 7th where they together discussed about the future of the University and the welfare of students.

It’s in the same meeting that the presidential adviser promised to compensate 21 students who reportedly lost their property.

“Out of good will, the General condemned the act of brutality by the military and sympathized with the victims of this act. It was with this spirit that he decided to make a personal compensation of 21 million shillings,” Patrick Nsamba, the Guild Finance Minister is quoted by local publisher ChimpReports as having said.

Several reports indicated that over 21 students had suffered at the hand of security forces who were camped at Makerere during the strike.

Graphic pictures of battered students appeared on the internet showing that the effects of military use of excessive force were not only on destroyed property but lives threatened by the brutal beatings.

Journalists who were reporting about the incident were also severely beaten and their equipment vandalized.

The Presidential adviser is paying Shs. 1 million to each of the 21 selected individuals to compensate for their destroyed property which included TV sets, beds, utensils, mobile phones but no mention of the journalists’ cameras that were destroyed as Police roughed them up.