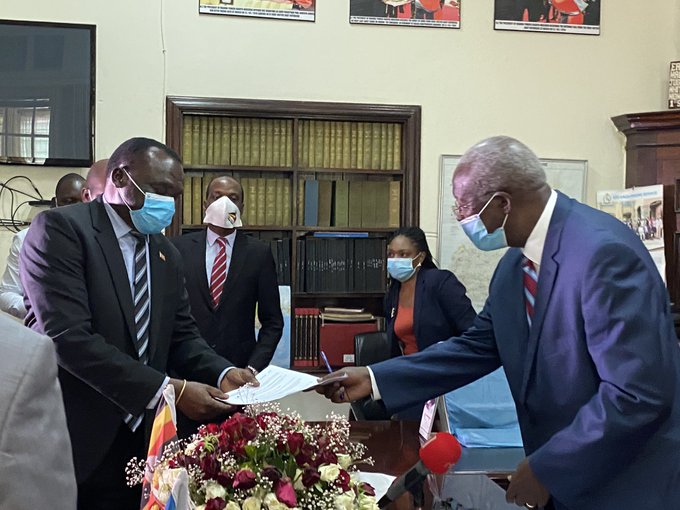 Justice Alfonso Owinye Dollo has today Monday, June 22 taken over the office of the Chief judge following the resignation of Justice Bart Katureebe on Friday, June 19.

Justice Owinye Dollo will be standing in until the President appoints a new chief judge as mandated by the constitution.

The hand over occasion was graced by a handful of learned colleagues who hailed the outgoing chief justice Bart Katureebe for his tremendous services in the legal fraternity.

”There is time for everything under the sun and it is time for me to leave,” Katureebe said as he bid farewell to his collegues.

Who is Justice Owinye Dollo?

Alfonse Chigamoy Owiny-Dollo is a Ugandan lawyer and judge. Until his appointment, Dollo has been serving as the Deputy Chief Justice of Uganda, since 30 September 2017.

Justice Owinye Dollo replaced Justice Steven Kavuma in August 2017, who had attained the mandatory retirement age of 70 years, on 29 September 2017.

He holds a Bachelor of Laws from
Makerere University, and a Diploma in Legal Practice from the Law Development Centre.

Justice Owinye holds a Master of Arts in conflict resolution, which he obtained from the University of Bradford in the United Kingdom.

He also has a certificate in advanced conflict mediation skills, obtained from the Center for Conflict Resolution, in Cape Town, South Africa.

In 1988, Owiny-Dollo served as legal counsel in the peace talks between the then rebel outfit, Uganda People’s Democratic Movement (UPDM), and the
government of Uganda. In that capacity, he wrote the peace agreement executed between the government and UPDM, on 3 June 1988, at Pece Stadium, in Gulu.

From 1994 until 1996, he was a member of the Constituent Assembly that drafted the 1995 Uganda Constitution. He also served as a member of parliament, representing Agago County in the 6th Parliament (1996–2001). During the talks between the Lord’s Resistance Army and the National Resistance Movement government of Uganda, from 2006 until 2008, Owiny Dollo served as legal counsel to Reik Machar, the Vice President of South Sudan, who mediated the talks.

In 2008, he was appointed to the High Court of Uganda, serving in that capacity until 2015.

In 2015, Owiny-Dollo was promoted to the Court of Appeal of Uganda. However, he couldn’t immediately take up his appointment because he was hearing a terrorism case in the High Court, in which 13 men were accused of killing 76 people in twin bombings in Kampala in 2010. He disposed of that case in May 2016.

In August 2017, the president of Uganda, appointed Owiny-Dollo, as the Deputy Chief Justice and under Ugandan law, the head of Uganda’s Court of Appeal and Uganda’s Constitutional Court.