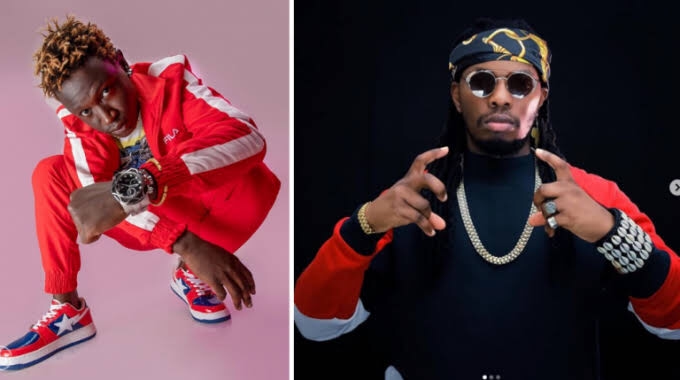 Rappers GNL Zamba and Gravity Omutujju are at war. The two have taken to exchanging artillery on social media with each downplaying the impact of the other in the industry.

“When I wrote Ani Yali Amanyi verses and sampled the Ugandan legend Elly wamala to bridge the gap of old and young crowds in Hiphop. It brought success and introduced Hiphop to more masses. 4 years after I had showed that the formulae worked, EMPTY TIN also got inspired and made Walumbe Zayabsampling Job Kafeero! I was inspired by Elly, and I give credit. Does Empty tin give credit to anyone that is why ka industry Kaffe tekakula. Ekko kumitima jabantu abamu !!!!  Not letting success build upon success and respect but bickering being small minded,” GNL posted

In response Gravity wrote, “ Ssebbo nsimbi, I heard u say. When you sampled Elly Wamala’s (R.I.P)ani Yali Amanyi? U credited him on the song and when I sampled paul kafero’s R.I.P) WALUMBE ZAYA (a classic) I never credited him ..Were u sober posting this?is it fear that takes over u whenever u listen to the masterpiece or is it the smoke effect that turns you deaf so u don’t hear ma credits? ??Thats why i dont smoke nor booze so to keep ma mind sober n fresh like a newborn and put ma ear on da ground, , listen to the oppressed majority’s problems and raise them to the concerned (GOVERNMENT) #BATUJOZENYO .first take cigarettes off yo ears ssebo (I hear its a habbit) if u were looking for relevancy you could have called me nenkuwa plan..even the generation yo used to sing for are now grown n busy in worries of their dieing businesses that the government closed during the pandemic. ..Mr try some other business if u had marital misunderstandings with yo HUSBAND. (go to court and get yo share) but musically you need to consultant me.”