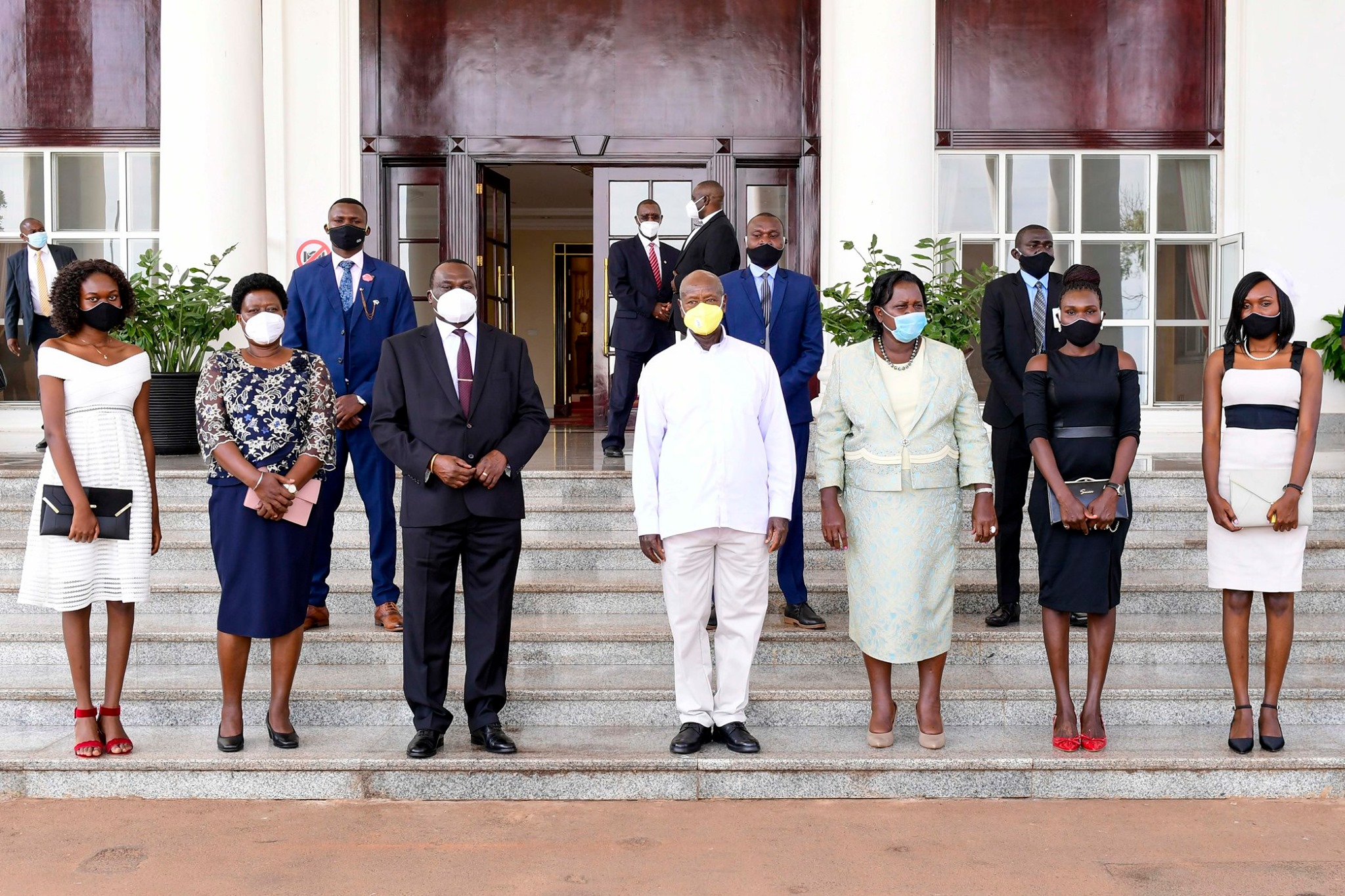 President Yoweri Kaguta Museveni has urged the Judiciary to prioritize their activities so that they minimize the gap between the respective arms of government and serve the people of Uganda well.

“If we prioritize well, there will be no problem. However, the indiscipline of some elites in this case is causing us problems” President Museveni said.

The President was speaking shortly after the swearing in ceremony of the new Chief Justice of Uganda Hon. Alfonse Owinyi Dollo and his deputy, Hon. Richard Buteera at State House Entebbe.

The oaths of allegiance for the Chief Justice and his deputy were administered by the Registrar of the Judiciary Ms. Sarah Langa and witnessed by the Prime Minister Ruhakana Rugunda, Deputy Speaker of Parliament Jacob Oulanya, Justice and Constitutional Affairs Minister Prof. Ephraim Kamuntu, the Attorney General William Byaruhanga and various judicial officials.

President Museveni said that the Judiciary in particular and other government bodies in general have a problem of prioritization which is slowing the speed of development and transformation of the country.

“There are three arms of government; the Executive, Parliament and Judiciary. Educated people man the Judiciary. However, we have a conflict with educated people because when we prioritize, they also have their own priorities,” he said.

Because of proper planning and prioritization, the President said Uganda now has tarmac roads from border to border and surplus electricity which was as a result of prioritizing roads and electricity which are the back-born of development.

President Museveni also revealed that when they came to government, he advised his colleagues to have the judiciary facilitated well to enable Ugandans get quick and fair justice.

“We said that let judges live comfortably and they judge the people properly. If we prioritize well, there will be no problem,” he said.

From the onset, the President said his list of priorities were Defense and security, Law and Order (Judiciary and Police), Roads and Railways (Transport), Electricity, Education and Health.

“If we have those as our priorities, then we shall develop and transform our country. You can really plan with limited resources but very effective,” President Museveni said.

On the concept of Justice, President Yoweri Museveni said that the NRM/NRA has always advocated for the traditional ways and methods of justice, which calls for an eye for an eye.

“In traditional Ankole, if you killed my brother, I must kill you also in revenge; an eye for an eye,” he said, adding however, that the concept of police bond is discrediting the judicial system where when one does a mistake, they are given a bond immediately without even sleeping in the police cell which frustrates the complainants.

The newly sworn in Chief Justice of Uganda His Lordship Alfonse Owinyi Dollo thanked the President for their appointment and said that he had given the people of Uganda a strong team to run the judiciary.

He said their appointments to the highest offices of the judiciary speak volumes about the President’s concern for justice and the rule of law.

“In Uganda we have you, and you have stood up to make sure that judiciary is strengthened to serve the people of Uganda, a case in point is when you facilitated and supported the enactment of the administrative act,” he said.

He appealed to the executive and other arms of government to increase on the number of staff in the judiciary especially judges to enable them tame the backlog of cases.

The Justice and Constitutional Affairs Minister Prof. Ephraim Kamuntu who congratulated the newly sworn in Chief Justice and his deputy for their well-deserved appointments and said that the country is confident that judiciary is in safe hands.

The new Chief Justice Owinyi Dollo and his Deputy Richard Buteera were accompanied by their families.