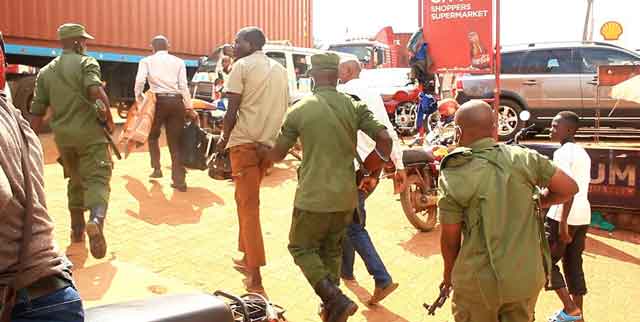 Chemutayi who is attached to the UPDF Tactical Training Center in Ruhengere, Kiruhura District was arrested after he knocked a Boda Boda rider in Mukono town on Thursday.  In the process, a gun, ammunition, military uniforms and a knife that he had wrapped in a carpet fell raising suspicion among residents. He who was riding a motorcycle was travelling to Kapchorwa.

However the Deputy District Internal Security Officer- DISO Mukono, Geoffrey Mukisa who was in Mukono town rescued him from the mob.

Chemutayi is currently detained at the army detach located at the community centre in Mukono town.

According to Mukisa, Chemutayi was also in possession of a pass-leave from the center but failed to explain why he was travelling with government stores.

Henry Nkata a bodaboda rider who was knocked says that Chemutayi was over speeding.

The District Residents Officer Fred Bamwine notes that Chemutayi will be released after they have established how he ended up possessing the gun and ammunition.

“He only has a pass leave but without a document allowing him to move with the gun, we are in contact with the unit where he came from to verify,” Bamwine said.