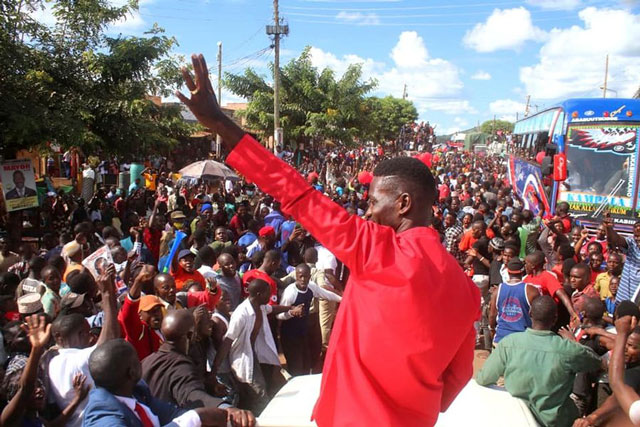 Kyagulanyi was heading to Arua district in West Nile region ahead of his campaigns that will start on Tuesday in Pakwach, Nebbi, and end with Arua town on the first day.

However, on his way along Kampala- Gulu highway, hundreds of supporters gathered in Bombo, Wobulenzi, and Luwero towns along the road to wave to him.

When Kyagulanyi reached Luweero town at around 4pm, hundreds of his supporters gathered along the road paralyzing transport, forcing Police to fire teargas to clear the way for him.

They danced to Kyagulanyi’s music and others chanted the People Power slogan.

“We thank God. We thank all of you who stood by the roadsides in over 40 towns on this route, waiting to wave at us. We arrived safely in Pakwach and we are ready to begin our campaign tomorrow (Tuesday),” he said when he finally reached his destination for the day.

Jonathan Kafeero Moses, a candidate for Kalongo Miti Parish Councilor seat said that the supporters wanted to re-affirm their support to Kyagulanyi and send a signal to NRM Presidential candidate Yoweri Kaguta Museveni that they are tired of his rule.

Other youths said they were tired of the NRM government over rampant unemployment, neglect of the area that brought it into power and they wanted to show support to Kyagulanyi whom they trust.

Others were excited to see Kyagulanyi whom they repeatedly referred to as their  President.

Kyagulanyi made no stopover in Luweero town but the clash ensued for over an hour as Policemen commanded by Isaac Kushaba, the Officer In-charge of Operations at Luweero Central Police engaged supporters in running battles.

The angry NUP supporters descended on posters of President Museveni, the NRM flagbearer and destroyed some of them during a protest of what they called unfair treatment of their presidential candidate.

Chris Johns Buwembo, the NUP candidate for Luweero Town LC 3 Chairperson seat says that the supporters destroyed posters to express anger over Police actions towards Kyagulanyi and NUP candidates whom it has repeatedly blocked to campaign but left NRM Candidates to violate COVID-19 rules.

By the time of filing the story, Police had arrested over 10 NUP Supporters and they were transferred to Luweero Central Police Station. Police had also maintained a single patrol monitoring traffic along the highway.

According to the Presidential campaign programme released by Electoral Commission, today NRM candidate Yoweri Museveni is the only one who was supposed to campaign in Luweero.

Museveni chose to hold closed-door meetings at the Presidential Demonstration farm located in Kawumu village in Makulubita sub-county. Museveni met NRM flagbearers, NRM incumbent MPs, and other party officials to ask them to mobilize for him.

Journalists were barred from attending the meetings and some NRM Party secretariat officials turned away.