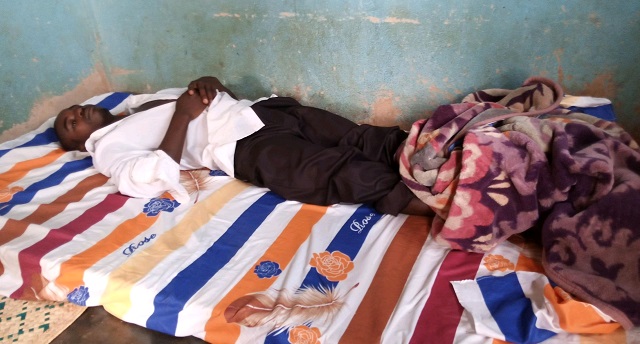 Two National Unity Platform-NUP supporters who were allegedly kidnapped from Katoogo village in Nama sub county in Mukono North constituency are rotting away at their homes after undergoing a series of torture. Twenty-three-year-old Joseph Nkoyoyo Kyakuwa and 53-year-old Fred Kamya Yuya sustained serious injuries but they were reportedly warned by their tormentors to stay away from public health facilities if they want to enjoy peace for the rest of their lives.

Yuya was later dropped at Kavule, Nansana municipality in Wakiso on December 24, 2020, under terrible condition. He has since been hiding for fear of his life. Unfortunately, his feet have started rotting up to the knee joints. Kyakuwa who was also dropped at Kavule, Nansana municipality on February 6, is also complaining of pain in his right leg, severe pain in the chest and poor visibility.

Much as the duo is still in pain and traumatized because of the torture, they have pleaded with their relatives to find simple remedies to treat them at home instead of taking them to hospital for fear of fresh abduction. Kyakuwa who spoke to URN while trembling said that he was picked from home at around 10 pm together with his friends, Sula Kiwanuka and Juma Mukasa who are still missing.

The two had paid him a visit at Katoogo trading center. They were all handcuffed and moved into a white van before their faces were blindfolded with black masks. “Ever since we were abducted, masks have been covered on our faces and tied in the neck, they only spared space for the mouth to enable us to eat food once in a while. We were subjected to severe beatings almost every hour. It is hard to describe how the torture chambers looked like but we were stepping on tiles full of itchy water, they could at times pour on our entire bodies,” Kyakuwa recalls.

He says the torture chamber seemed to be big and full of people who were yelling out of pain and were not allowed to talk to each other.

Kyakuwa notes that prior to their release, they were taken to another facility for treatment. “We were given tablets and injections that helped regenerate some energy in our bodies. At that center, they could do a routine roll calling of members,” he said.

Kyakuwa recalls hearing the abductors calling names of other victims of torture such as Patrick Bagambe, Fred Jjingo, Rashid Kawunda, Sulaiman Kiwanuka and Junior Ainebyona. He believes that some of the torture victims came from Kyotera, Mpigi, Kampala, Mubende and Mityana districts.

Kyakuwa’s father, Joseph Ssekimwanyi is scared about the life of his son which is deteriorating each passing day. According to Kyakuwa, his son can no longer move and experiences nightmares that force him to wake up shouting out loudly pleading for forgiveness whenever he tries to sleep.

Yuya, a father of 20 children and one pregnant wife cannot move because his legs are rotting away following two days torture. According to Yuya, he is currently unable to work and feed his family because of severe torture.

Byekwaso Venensio, the Katoogo LC 1 chairperson says the two torture victims are part of the four people who went missing in his area. He notes that he reported the matter at Mukono police station and has tried searching for the other missing people in vain. He appeals to whoever is concerned to at least release the residents in whichever condition they are.

Mukono Division Police Commander, Abubakar Musiho acknowledges receiving reports from Nama sub-county police station about the re-appearance of the residents claimed to have been abducted. He says they have embarked on investigations to establish what could have happened.