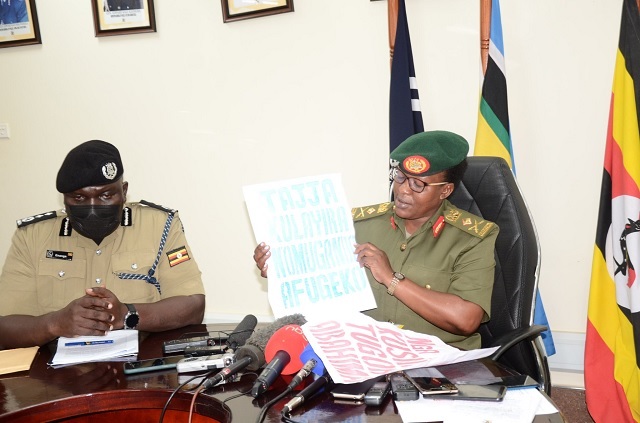 The Uganda People’s Defence Forces-UPDF has said there are groups of individuals plotting violence, threatening to disrupt the 12th May ceremony as President Museveni swears in for a new term.

Addressing journalists at Naguru police headquarters today, UPDF spokesperson Brig Flavia Byekwaso said they have got credible information about a section of Ugandans planning to disrupt the swearing in functions of the elected President Yoweri Kaguta Museveni.

“I would like to bring to your attention the continued hate speech by a section of individuals through help of foreigners, they think they can stop the swearing-in of President Museveni,” said Byekwaso.

She has revealed that security agencies have confiscated posters to be used in the protests with words of hate speech that incite violence to the members of public.

“The posters circulating in the city have words like, “Tajja Kulayila Nomuganda Afugeko,” “Nga 1st May, Kusiiba Tugoba Abahiima”, Byekwaso said. She however warned that anyone planning this will be dealt with accordingly.

Asked whether security has yet made any arrests, the army spokesperson said whereas no one has been arrested, they are closely following up leads and that soon they will take action.

The second runner-up in the just-concluded January 14 polls, National Unity Platform presidential candidate Robert Kyagulanyi has on several times disputed its outcome and called upon supporters to challenge President Museveni’s election before his swearing in next month.

Kyagulanyi also claimed that he was the winner of the January 14 presidential election, asked his supporters to reclaim his claimed 54.19% victory which he says was robbed from him by the Electoral Commission.