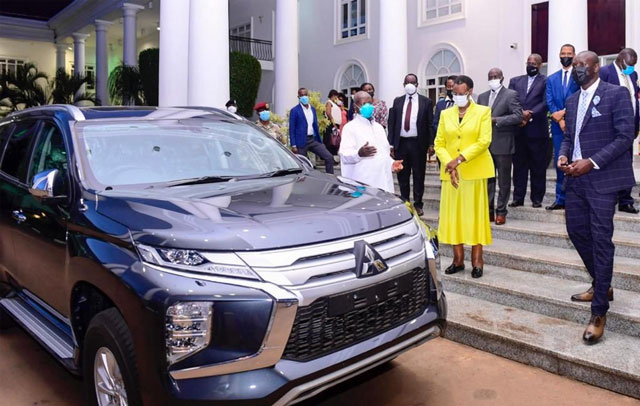 During a function held at the State House in Entebbe, Museveni and the Education and Sports Minister Janet Museveni honoured the former Cranes skipper and rewarded him with a Pajero Sport vehicle.

The function was also attended by the State Minister for Sports Hamson Obua, FUFA President Moses Magogo, National Council of Sports (NCS) General Secretary Bernard Ogwel and his Board chairman who is also President of the Uganda Olympic Committee (UOC) Donald Rukare.

The development has excited the football fans who believe this is a good gesture that will boost all football players to work hard like Onyango every time they get a chance to represent the country on the International stage.

Jeremiah Kasadha, a Uganda Cranes fan says this is a good arrangement that will boost the morale of other Cranes payer to work hard just like Onyango.

Nicolas Kajura, another Uganda Cranes fan says this is an eye opener to all players to wake up and deliver for the national team well knowing that they will be rewarded.

“This is an eye opener for all Uganda Cranes players. It shows that whenever you get a chance to represent your country one must always perform well knowing that they could be rewarded,” said Kajura.

Myres Ndyabawe says he has been following the Uganda Cranes team but this is something new and he believes it will come with an advantage that will solve even the questions players have been asking the government.

“For the time I have followed the National team, I have not seen this. Many people have been asking the central government to recognize sports people who have represented the country well,” said Ndyabawe.

Last month Onyango who plies his trade for South African side Mamelodi Sundowns announced he was retiring from the national team after over 12 years. The development came after the national team failed to qualify for a third straight Africa Cup of Nations (AFCON).

The former Cranes Skipper began his career with Premier League side SC Villa before moving to St.George in Ethiopia. He has also played for SuperSport, Mpumalanga Black Aces and Bidvest Wits University in South Africa.