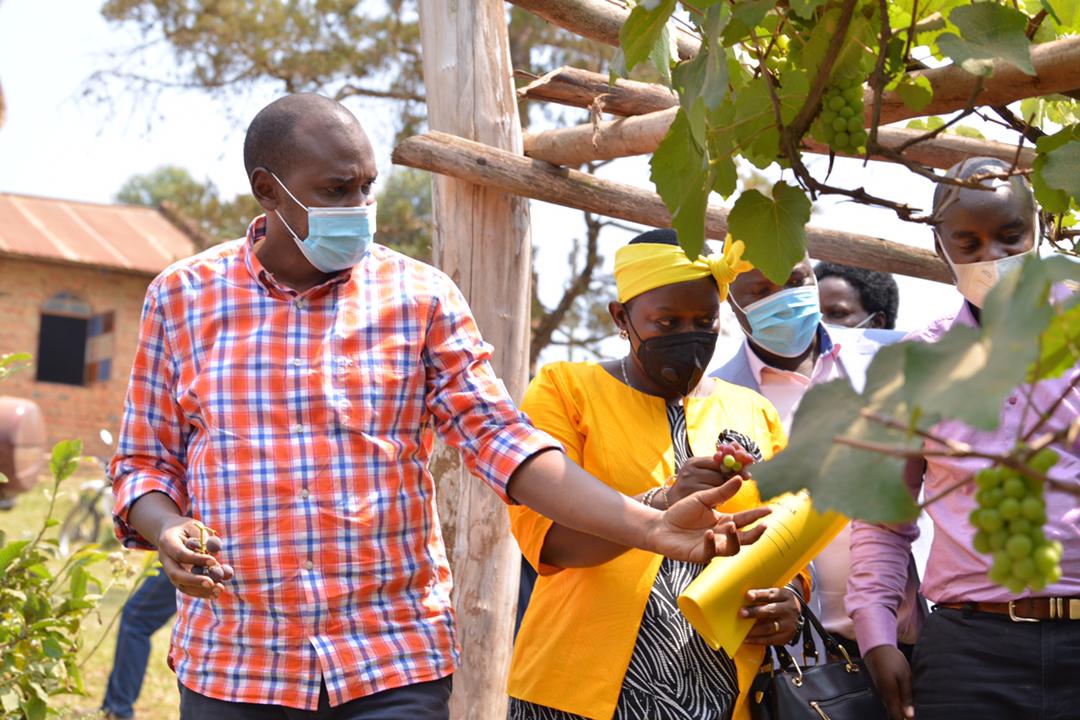 The Minister of Agriculture, Animal Industry and Fisheries, Mr Frank Tumwebaze has said Government is planning to boost grape farming in Uganda as one of the ways to help Ugandans improve their household incomes.

Acting on the directive of President Museveni, the minister was on a one-day field visit to grape farmers at Nyakayojo and Katojo Cells in Mbarara City South Division and he explained that the intention of his tour was to help farmers was to produce good yields that would fetch them good market both locally and internationally.

“I came with a team of experts from NARO and NAADS to ensure availability of quality seeds because the President directed me to ensure they are helped to also grow table grapes for home consumption but more so, the quality of our grapes will create the market, “said Hon Tumwebaze. The Minister encouraged grape growers in Mbarara to embrace growing table grapes that are intended for consumption while still fresh.

“We are currently having a trade problem with Kenya. We used to get grapes from Kenya now we no longer do that. That’s why the president sent me here to encourage you to take advantage of the market we have,” Hon Tumwebaze told the farmers who hosted him at the farm of Stanislaus Kamanyiro, a prominent grape farmer in Mbarara City.

Having toured Mr Kamanyiro’s farm that he started in 2000, Hon Tumwebaze asked to grow more table grapes since they have been growing mainly wine grape. Mr Kamanyiro who operates under his Pearl Wines Grape Farmers thanked the minister and reported the 2008 unfulfilled promise of a modern wine-making mini-factory made by the president when he visited his place.

Hon Tumwebaze promised to make a follow-up on Kamanyiro`s complaint and also directed Dr. Ambrose Agona the Director General of National Agriculture Research Organization (NARO) through Mbarara ZARDI to coordinate a team of experts from the Agricultural Research Organization, NAADS, District Production Officer and Mr Kamanyiro to sit and find possible ways of getting good quality seeds and report back to him within two months.

Dr Agona, responded that within in one or two months they would be giving the minister feedback.

Dr Agona said NARO would use the committees’ farmers have set up to gather the metrics and data concerning the land each farmer in this project has. On the issue of table grapes, Dr Agona said NARO had already done some samples of grapes that Mr Kamanyiro had recommended and that they would be ideal for table grapes.

“We will work hand in hand to first find out if the land is rich enough with soil levels or fertilities that would enable them to grow well,” Dr Agona said.

He also promised the minister that NARO would be doing more sensitization of farmers on more ways of how they can handle wine grapes in a bid to produce quality outputs.

“There is a need to find means of how farmers can sort out unripe grapes and store them somewhere until they ripen,” Dr Agona said adding that such a method is better than chasing away farmers who have some unripe grapes which he said causes them financial loss.

Alex Asiimwe, the Chairperson of Nyakayojo Grape Farmers Association, thanked the minister for his timely visit and promised to mobilize more farmers to join the enterprise to be able to sustain the readily available market.

“Your visit is timely, as chairman of the association, I promise to mobilize more farmers also to join since government has also picked
interest in the crop,” Mr Asiimwe said.