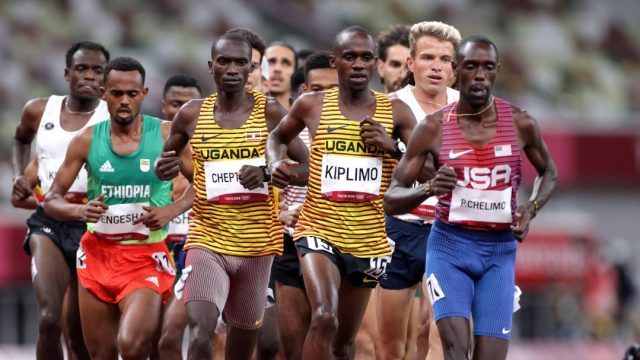 All three Ugandans who participated in the men’s 5,000m race qualifiers at the Tokyo 2020 Olympics have qualified for the finals.

The trio of Jacob Kiplimo, Oscar Chelimo and World record holder Joshua Kiprui Cheptegei has all booked spots in the final race that is slated to take place on Friday August 6th.

Chelimo was first on the track in Heat 1 where he came in fourth place posting a time of 13:39:07.

And like it was in the men’s 10,000m, Kiplimo and Cheptegei ran side by side in Heat 2, finishing fourth and fifth respectively.

Kiplimo posted 13:30:40 while Cheptegei posted 13:30:61 booking a place in the Friday finals where he will not only fight for the Gold medal but also fight to keep his record.

Cheptegei currently holds the World record for men’s 5000m having posted a time of 12:35:36 in the Monaco Diamond League meet in August 2020.

The record was previously held by Ethiopia’s Kenenisa Bekele for a period of 16 years.