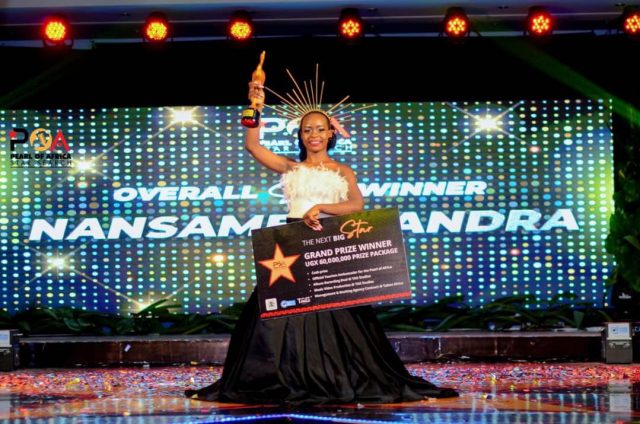 Sandra Nansambu emerged the winner of the first Season finale of the Pearl of Africa Star Search on Sunday August 8, 2021 after 11 weeks of breathtaking performances, musical training, and Tourism Adventure.

Nansambu got the highest score from the judges after an outstanding performance and excellence in the tourism challenge, to beat out the other top 5 talents walking home with the coveted Grand prize package worth UGX 60,000,000/= including a cash prize, recording contract from TAG studios, Professional artist management and PR, collaborations, destination trips and the paid role of Tourism Ambassador.

Like the stars they are, all the contestants put up a show of a lifetime;

With a heart melting performance, Northern Uganda’s Tony Agami opened the night’s solo acts with a ladies’ favorite ballad, “This is why I love you” by Major. His Theatrical ensemble complete with a living room set and a contemporary dancer pulling off an engagement proposal, as he expresses his love for her, while managing to maintain excellent vocals was thrilling.

Bruce Dickson, who calls himself “Omuyilibi” brought his A-game to the stage, with an energetic performance of Sauti Sol’s “Sura Yako”, which excited the judges, with Navio notably remarking that he’s one of the few artists who can pull off a 3 hour straight energetic performance.

Ibrahim Balunywa who represented Eastern Uganda delivered an out of this world performance, strumming his guitar to the sounds of John Blaq’s “Ebyalagirwa”. Like the artist he is, he never misses a chance to recreate any song into his own masterpiece, with his iconic Lusoga rap. He not only owns the stage, but the band too, that he perfectly blends into. The multi-talented POAstar finalist that Navio has time and again, termed a full artist, serenaded the judges and online audience off their feet.

Dressed like a performer from the classic 80’s, Central star, Tracy Mirembe did a sensual rendition of Iryn Namubiru’s “Nkwagala Nyo” that got Judge Cindy and Lydia Jasmine from the Jury feel like they have a run for their money, as a new diva is in the rising. In the words of Judge Bismac, “…Beauty, talent and knowledge in one package”.

Officially the most emotional act of the day, Sandra Nansambu from the Central region brought judges and the entire jury to tears but also left them in awe with her strong vocals in Whitney Houston’s “Greatest Love of all”. She featured persons with disabilities and children in her performance to bring out her message of inclusion and inspiration that “Disability is not inability”. She got a standing ovation from the judges and jury.

The final performance of the night gave more than a competition act, but a show to remember. Doing a mix of Philly Lutaaya’s “Born in Africa” and Yemi Alade’s “Africa”,Yesuanjagala Carsten sealed the show with an entertaining dance and mellow voiced performance that got him all positive comments from all the judges and jury.