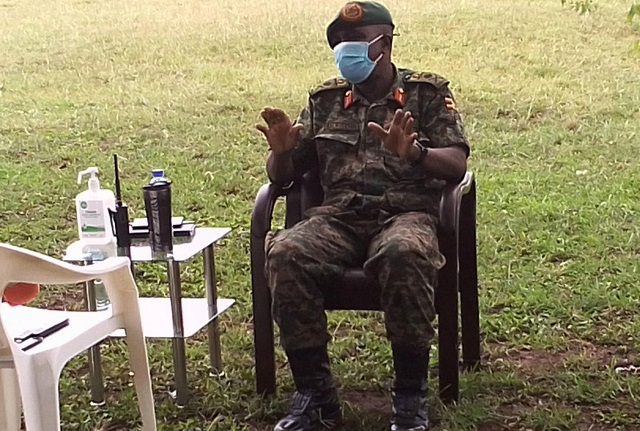 The UPDF 3rd Division Commander Brigadier Joseph Balikudembe has issued shoot to kill orders against any warrior who puts up resistance during the ongoing disarmament exercise.

Brigadier Balikudembe issued the orders on Saturday during the official launch of the cordon and search operations in Nabilatuk, Amudat and Nakapiripirit districts.

Addressing local leaders, elders, youths and religious leaders in Nabilatuk district, Brigadier Balikudembe said there would be no more mercy for armed warriors who try to resist the forceful disarmament once there is credible information implicating them.

Nabilatuk Resident District Commissioner Milton Odongo called for teamwork between the political leaders and security organs to ensure the smooth implementation of the exercise, which is expected to last for 90 days.

The community has shown full support to the disarmament exercise and urged UPDF to intensify intelligence gathering and work with the local council leaders as well as kraal leaders who are linked to the armed warriors. Peter Lonyala, a resident of Nabilatuk town council says they are tired of bloodletting and now want to embrace peace.

“Let’s tell our people to return guns because they have caused mayhem and death amongst us. Let’s be open and tell the elders please tell your son to return guns to the government. Let’s inform them that if you don’t want to hand over the gun, you will suffer. We should talk to our people,” said Lonyang.

Since mid-last month, security agencies have recovered about 40 guns with hundreds of ammunition. More than 200 warriors are waiting to appear before the court-martial.

UPDF is determined to recover all illegal firearms during the ongoing second disarmament codenamed “Peace for All.”